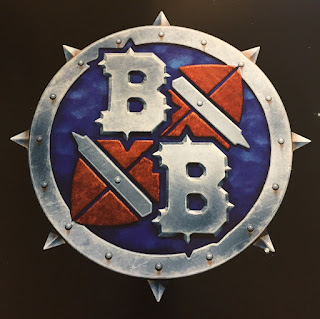 Mad Johan: The Gridiron Gravediggers are the oldest deep of the Deep North League- Southern Regional Conference, but they have gone through a lot of changes over the years.

Lord Summervale: This year, they are entering the season in a rebuilding year as they have lost their crowd favorite Minotaur in the off-season.

Mad Johan: I saw his picture when I was eating breakfast this morning... on the side of my milk carton. Hopefully, he will turn up safe and sound.

Lord Summervale: Indeed. This Dwarf team has taken on some hard-hitting teams in the past and I don't expect them to back down from the challenge today. Team captain and runner Harry Harryson had this to say....

Harry Harryson: Ack... I have heard all my life that this Chaos Warriors think they are some 'ard blokes. Let's see how they fare against some rock 'ard competition.

Mad Johan: He sounds confident, but in the pre-season they only managed to tie the Skulsmash Reeverz. Not exactly a rock solid record.

Lord Summervale: Despite the tie, they did go yard-for-yard and hit-for-hit against a hard hitting opponent.

Mad Johan: I guess. This conference is pretty bashy with an Ork, two Chaos, and a Khemri team. I guess we will see if they measure up to the competition.

Lord Summervale: Lord Graf the Unpleasant of the Gravediggers and Harry Harryson of the Rock-N-Rollers have come out for the coin toss. They start the pre-game handshake, but it soon diverges into an arm-wrestling competition before refs can separate them to get down to business.

The coin is up, and the Dwarfs win the toss. Lord Graf makes some crack about Dwarf-tossing and a brawl almost breaks out immediately. The refs manage to hold everything together long enough for the Dwarfs to decide to take the ball first.

With that, the kick is up. Boom!

Mad Johan: You would think that a bunch of beastmen could get a better kicker?

Mad Johan: Now you're getting in on it too!

Lord Summervale: A missed block up front by Crazy Ivan opens a gap and lets Goat Boy Lif and Ug Da' Natural to dive deep into the backfield of the Rock-N-Rollers early. However, Ferro Ironbreaker picks up the oncoming rush with a punishing hit on Goatboy. This allows Harry Harryson to make for a small gap in the Chaos line. 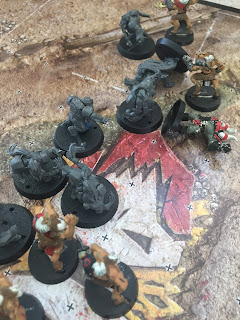 Mad Johan: Another big collision! This time between Krong and Mad Oleg, makes that gap even possible.

Lord Summervale: There is some jostling up front, and Grrrra manages to come around the wing and blitz Harry Harryson from the back. Both go down, and the ball flies loose.

Mad Johan: Dwarf Blitzer Roz Shaft does his patented move, “Da Shaft” and sends Krong the Fister to the dug-outs for the rest of the game! Ouch!

Lord Summervale: Dwarf Blocker Brock Rocksolid manages to haul in the ball from a bounce, K.O.ing the Beastman Lothar in the process! The Rock-N-Rollers go to work and bash the line of scrimmage wide open! 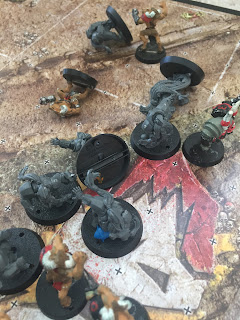 Mad Johan: Oh, well it looks like Evig managed to dodge around Ferro Ironbreaker, and blitz Brock Rocksolid in the back!

Lord Summervale: Another mad scrum for the ball has broken out.

Mad Johan: Another crushing hit between Mad Oleg and Killa da Kind sends the beastman to the dug out. Then, on the other side of the pitch, Crazy Ivan sends Goatboy Lif to the dug-out! The Rock-N-Rollers are thinning out this Chaos team pretty fast!

Lord Summervale: The ball exchanges hands pretty fast and dirty as it bounces around. However, Kronk the Beastman rolls out holding the ball. He tries to toss it down field to Grrra, but the beastman receiver drops the ball. 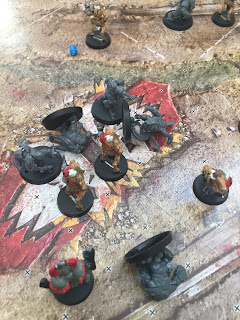 Mad Johan: That gives the Chaos defense a bit of breathing room considering they are down 4 players right now.

Lord Summervale: Harry Harryson drops back and gets the ball, but Kronk blitz him and the ball is loose again.

Mad Johan: The cold weather here in the Chaos Wastes seems to be making this ball hard to hold on to!

Lord Summervale: As the clock ticks down, both teams just start to ignore the ball and instead just start pushing each other around. As the half ends, the ball is just sitting there on the line of scrimmage with no one paying any attention to it.

Mad Johan: The Gridiron Gravediggers probably want some payback after losing 4 guys to the box! But, if you want to win the game and advance in the Tournament, you have to score some points.

Lord Summervale: Indeed! Well, as we go into the half we will return you to the Cabalvision IV studios for a look at games around the Olde World and a word or three from our sponsors. The score here in the Chaos Wastes is still 0-0.
** ** ** ** **

Lord Summervale: Welcome back to today's Princess Owayanna Healing Bottled Water tournament game between the Gridiron Gravediggers from the Chaos Wastes and the Dwarf Rock-N-Rollers. We are still all tied up at 0-0, but the Gravediggers are going to receive this half.

Mad Johan: Well, what is left of them anyway. 3 Beastman and 1 Warrior are still in the dug-out. However, their back-up Beastman Ench Varner has taken the field. They need all the help they can get!

Lord Summervale: The kick is up..... and the Dwarf team goes to work right away! The ball lands close to the sidelines, but the closest player is a rushing Dwarf Blocker! The Gravediggers will have to move fast! 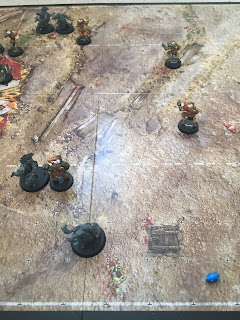 The Beastman Evig scoots over and collects the ball while Grrra takes out the oncoming Dwarf blocker.

Mad Johan: It looks like the Chaos Warriors, Lord Graf and Uckleif are making a gap in the center of the Dwarf line.

Lord Summervale: Despite the Rock-N-Rollers moving up to fill it, the Gridiron Gravediggers bash it open and Evig manages to race through. It is up to Harry Harryson to stop the Chaos drive in a 1-on-1 situation!

Mad Johan: You call that a hit! It was more like a love tap from Harry!

Lord Summervale: Perhaps, but it gives the rest of the Rock-N-Rollers time to get back and contain the threat. This time, Harry finished his man.... errr.... Beastman.... as he lays out Evig and forces him to cough up the ball.

Ferro Ironbreaker if there to scoop up the ball and head towards the end zone. It doesn't look like the Gravediggers have anything left to stop them with.

Mad Johan: Mad Oleg just put Kronk in the crowd and cleared the way for Ironbreaker to run it in!

Lord Summervale: Indeed! And that is what happens. Ferro Ironbreaker runs it into the end zone huffing and puffing. However, that puts his team in the lead! 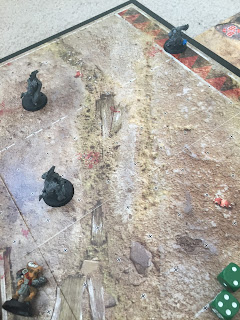 Mad Johan: Thankfully, Killa Da' Kind comes out of the K.O.ed box for the Gravediggers. However, this team is in a tight spot. They are down by one, and are not exactly known for their quick strike ability!

Lord Summervale: The two teams line up for the kick-off. Boom! It is up and Ench Varner is back to receive it.

Mad Johan: What! Someone from the stands just hit Ench Varner with a rock! Down he goes!

Lord Summervale: That was unexepcted! The Chaos Warriors on the line try to punch through, and make a gap. However, a missed block by Evig allows a Dwarf blocker through to Ug Da' Natural who has the ball. However, he stiff arms the blocker away and stays upright. 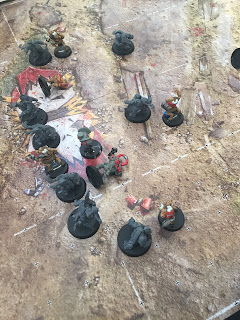 Mad Johan: The Rock-N-Rollers were ready for this play and quickly sealed the hole back up.

Lord Summervale: This time, two Dwarfs get to Ug, and he goes down and the ball comes loose.

Mad Johan: Beastman #10.... Lothar.... shows a bit of life and smashes Rocksmelter into the turf. The meat wagon will have to collect him after that hit!

Lord Summervale: Ench Varner recovers enough and tries to get the ball again, but fumbles it.

With that, time runs down as the two teams push and shove at each other. The Dwarf Rock-N-Rollers have beaten the Gridiron Gravediggers 1-0. The Gravediggers have been eliminated from the tournament.

Mad Johan: Thankfully, we are all ready in the Chaos Wastes and they won't have far to go!

Lord Summervale: The Rock-N-Rollers have now joined the Nottingham Nobles and the Da' Rat Packers in the semi-final round. However, their opponent will be the winner of the Chaos Goat Herders vs. the Skaven Cheez-Ballerz which is still to be played.

Mad Johan: Neither team played particularly well with a lot of fumbling and blown assignments. However, the Rock-N-Rollers made fewer mistakes and frankly I was surprised at how rusty the Gridiron Gravediggers looked.

Lord Summervale: True, but who do you think the respective MVPs were for this match?

Mad Johan: Well, Ferro Ironbreaker needs to be considered for recovering the ball and running downfield to score, but ultimately it was Mad Oleg who allowed him to break loose with a great down field block that sent a Chaos defender into the crowd. Mad Oleg is my Rock-N-Roller MVP this match.

The Gravedigger MVP is a bit harder. I'm going Lothar as he was the only Chaos player that seemed to show any inclination to do what Chaos players do best. Hurt people.

Lord Summervale: The injury report is coming in now from our sideline Grots. That hit from Lothar injured Strom Rocksmelter's back, that will probably effect him the rest of his career. Krong the Fister and Ug Da' Natural will be back next game as he was only badly hurt. Meanwhile, it sounds like the mortician has been summoned for Killa Da' Kind.

Lord Summervale: That wraps up tonight's coverage of the Princess Owayanna Healing Bottled Water Tournament. The Dwarf Rock-N-Rollers defeated the Gridiron Gravediggers 1-0. Today's match was sponsored by Princess Owayanna's Healing Bottled Water, it quenches your thirst and heals what ails ya'! This is Lord Summervale and Mad Johan signing off. Thanks for watching Cabalvision IV.