As you may recall, for Thanksgiving my family had a lot of fun playing Total Carnage!  The Christmas Season appears to be no exception.  As soon as I walked int he door, the youngsters were asking to play the "Car Game" again.  I was obliging and we pulled out the cars and blocks and got set-up to play again. 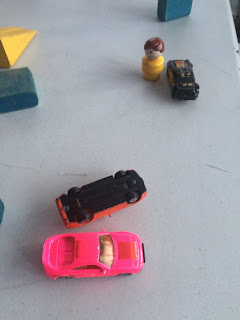 We used some of the same car names as last time.  Above you can see Barbie Basher scoot past the wreckage of Speedline and sneak up on Black Shadow. 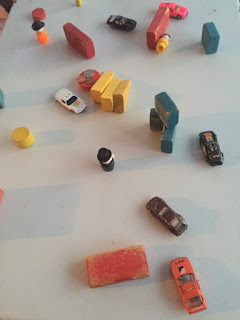 This game was a Kill'em All scenario.  The top three cars are Barbie Basher, Titan, and Money maker.  The bottom three are Black Shadow, 9-1-1, and Speedline.  We had a smaller table to play on so we only used three cars per player instead of five. 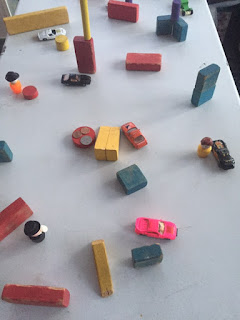 We also played a few Capture the Macguffin scenarios using the top hatted Little People as the objective.  If you ran into him, you picked him up. 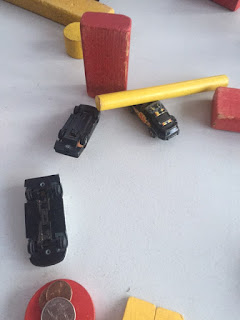 In this one, Black Shadow crashed into the red block, and a yellow pole fell from the top of it and landed on him.  He was destoyed.  That was pretty par for the course as we smashed into terrain and each other like crazy.

For Christmas, I gave them all a copy of the rules that I had printed out.  They were pretty excited.  Another happy Christmas memory as we sang a "Slaying Song Tonight"!
Posted by Blood and Spectacles Publishing at 2:19 AM