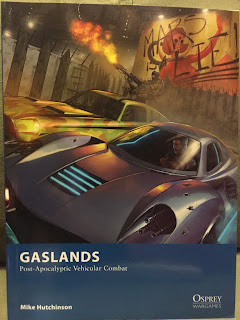 The Car Combat genre of wargames is an interesting breed.  It has a long pedigree, going all the way back to the 80s.  It is unclear where the origins of the car combat genre first appeared, however I imagine the Mad Max series of movies played a large part in their origins.  The first Car Combat games I can recall are Steve Jackson’s Car Wars and Games Workshop’s Dark Future.  I personally never really got into either game as they were not my cup of Tea at the time.

In a way, Gaslands plays off the ideas of Twisted Metal and meshes it with the movie The Running Man.  The game represents teams competing on a season of a TV show called Gaslands where the winning team earns a trip of the post-apocalyptic ghetto of Earth to the paradise of Mars.  They only need to beat all the rivals to win.

I have a personal history with Car Combat wargames as well.  I was an avid player of the Twisted Metal games.  When I was 13 or 15 one of my first tries at writing a wargame was attempting to make a Car Combat game.  I called it Burning Rubber and it involved making a team of racers.  They actually raced around a track that had pre-set squares.  The track had obstacles like ramps, oil slicks, cows, mines, potholes etc.  You bought drivers and cars and equipped them with weaponry to fight each other with.  For a first timer, it had a lot of the hall marks of some of my later designs such as campaign play with driver experience, injury, vehicle permanent damage, and resource management of the team.  Looking back, it wasn’t a bad first attempt.  There were even different types of car races, with the ultimate goal to be the first team to get a car across the finish line.  I wish I still had the rules, but they were lost to time long ago.

When my kid was younger, I also made up a quick race game that involved math Flash Cards.  The track was composed of facedown flash cards.  To move your car, the player had to answer the flash card.  Cars could only go a certain number of flash cards in a row.  This was a fun game to help teach my kid math instead of boring flash cards.

Since then, I have continued to work on Car Combat games.  My current title is Total CARnage.  Here the focus is on making a simple, fun, family game based on dexterity mechanics that was heavily inspired by playing Flick’em Up!  In addition, I have been working on the campaign and expanded rules for Redline which is a more traditional wargame using templates, rules, dice, etc.  for mechanic resolution.  This game has mostly been inspired by airplane games more than other Car Combat games.  So, I was eager to dig into Gaslands.  Let’s get in under the hood….

Things I Liked
Right off the bat, I loved that this game was designed for using Matchbox cars, Hot Wheels, and other similar sized brands.  That element spoke to the affordable gamer in me.  I don’t have many of those sitting around anymore, but they are cheap enough and now have some wacky designs.

This game uses a clever Initiative/movement mechanic called “gears”.  A turn is divided into 6 Gears.  Depending what Gear your vehicle is in determines how many times it can move and influences what maneuver templates it can use with or without penalties.  Vehicles in a higher gear are activating more often and therefore “moving” faster than lower gear vehicles.  As you go up in gears, some movement templates become easier or harder to do.  This acts as a form of stress that can cause cars making the wrong maneuver to wipeout.  Higher gears also make it harder to control if you wipeout.
The movement templates mean that a player never uses a tape measure, worry about turning radius by degrees, etc.  It is a relatively smooth and intuitive system.   Templates are also used for ranged shooting attacks.

Rams and shooting attacks are opposed rolls.  They are very simple based on the number of attack dice of the weapon, with a success being 4+.  Easy to remember.  Vehicles being attacked can evade and nullify a hit with a 6+.  I prefer when a game allows you to nullify a hit and not just sit there while getting shot up.  Simple and intuitive mechanics for combat

Finally, I like that many of the scenarios are actual races where you need to get through “Goals” the fastest.  That means you need a balanced force of speed and muscle to get you through the scenarios successfully.

Things I Did Not Like
For some inexplicable reason, this game uses custom dice!  Granted, they explain it as 1= this, and 2= that but it encourages you to make your own custom dice for the “gear shift” mechanic.  The “Gear Shift” mechanic seems to take a page right out of X-wing and similar games.  Each vehicle has a handling rating, and you roll the gear shift “custom” dice.  Some results can be used to cancel results, and others put stress on the car/driver by causing a slide, spin, or picking up a hazard token.  Too many hazard tokens and your car will wipeout.  Gear Shift dice allow you to change your gear up or down, remove hazard tokens, or nullify slide/spin results.  Ultimately, cars with high handling lead to a lot of fiddliness to determine their “gear Shift” dice.

I was disappointed with the campaign system.  It allows you to create teams based on sponsors and get some sponsor perks but ultimately drivers and cars do not have much of a path for advancement or debuffing.  They use Audience Points to allow some customization, but the campaign season is just not as meaty as I would like.  I mostly blame space limitations for it.  However, there is a lot of good details in the sponsor and sponsor Perks section to allow you to make distinct race teams.

Meh and Other Uncertainties
The game uses a dashboard off to the side for each vehicle.  That is where you keep track of hazard tokens, gear, damage, etc.  I am glad that the game specifically calls out that these go on the side board of this game would seem very token heavy on the game board.  Thankfully, this is not the case.

The game allows for a wide array of vehicles culled from all sorts of sources from motorbikes, to monster trucks, to helicopters and tanks.  I am pretty sure I could build all of the cars from Twisted Metal franchise for use in Gaslands if I wanted to.

The back of the book has all the templates and dashboards you need to play ready to photocopy.  I am pretty sure they are also on the website for Osprey too.  However, you will need to make your own.  It also has a quick reference section as well.

I enjoyed the full color art in the book, even if it was a bit stylized for my usual tastes.  There were also many shots of cars driving aroudn and fighting.  Some of the Browner colored cars were uninspiring, but some of the Performance Cars looked very cool.  Plus, they used a couple of interesting angles to add to the drama and "TV Show" look.

Final Thoughts
I could see this game being sold by Fantasy Flight Games.  It has all the potential elements.  It basically uses the flight path model with movement templates.  It has custom dice with symbols that cancel each other out and add tokens to the car’s dashboard.  I could easily see them selling single car packs with driver and equipment upgrade cards too!  It really feels like this was a game pitched to them, but picked up by Osprey in some “Freaky Friday” style of mistake.

This game will ultimately work best as a club game where each player has one or two cars they control.  The rules are relatively explicit about this when they go into the scenarios and building a team.  It should lead to some good mayhem and seems easy enough to play.  I agree that the “Gear Shift” mechanic will be better for fewer cars on your team rather than more.

Ultimately, I am glad I got these rules.  I think my family will prefer to play Total CARnage but I think my regular gaming buddies would prefer this game.  It also gave me some ideas to explore for my own Car Combat games in the future.

Posted by Blood and Spectacles Publishing at 7:20 AM