As I was rooting around in my old Photobucket accounts, I found these random photos.  These are homemade models for Aquanautica Imperialis.  It is a game of ocean navies in the Warhammer: 40K Universe.  The entire game was born out of the Battle for Ammoriss campaign.

Aquanautica Imperialis was one of my first games, and it wet my appetite for more.  This game had some success as other players online began to adopt it and make models for it.  It had a handful of vocal and enthusiastic fans for a couple of years and was my most downloaded game for a long time.  It's success spawned a submarine game called Aquanautica Imperialis: Battle for the Depths and I was working on another variant called Aquanatuica Imperialis: Terror of the Deep that I eventually abandoned work on. 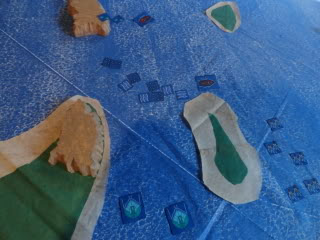 The game itself has ships and stats for all of the major factions in the Warhammer: 40K Universe plus a few more.  In addition, it has a few of the minor ones and former factions in the Experimental Rules section.  In addition, I had made an entire book of paper templates to be used in the game so it is a fully playable game.  However, I was not content to just use paper templates. 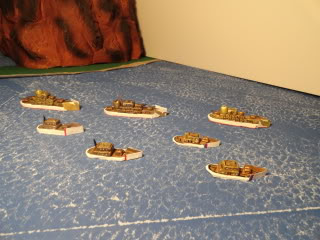 I also did some work on vreating my own models for the game.  Above you can see the Ammoriss Naval Planetary Defense Force or the AN-PDF.  2 Cruisers, 1 light cruiser, and 4 escorts. 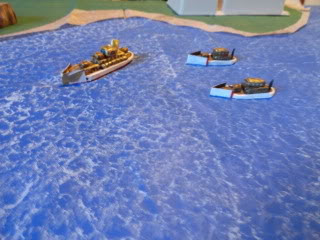 Her you can see the Stalwart Light cruiser in operation with two Constant escorts off the coast of the Salvation Islands Archipelago near Angel's Landing. 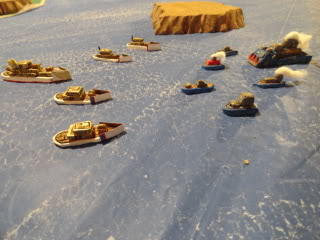 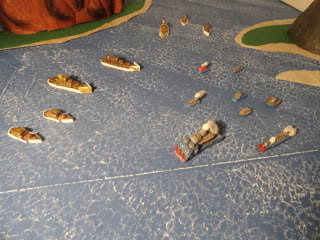 Of course, I didn;t just make models for the Imperial Planetary Defense Force.  I also made models for an Ork force.  Above you can see the AN-PDF facing off with and engaging an Ork Kill Fleet near Da' Deff Islands.  The force also included a number of submarines and a capital ships.  Ork ships were the easiest to make. 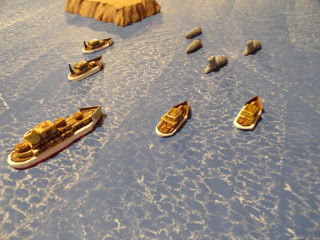 I also made a force of Tyranid Bio-vessels.  Here you can see the AN-PDF giving chase to some of the smaller Tyranid constructs.  Some of them got very, very larger.  However, I will have to get in a game for some pictures of those.

Aquanautica Imperialis plays like a mash-up of Battlefleet: Gothic, Man-o-War, and Dystopian Wars.  It has rules for submarines, flyers, torpedoes, mines, etc.  I even put together a set of Campaign rules and Scenarios, but those were never fully integrated into the main rulebook.  Instead, I moved onto other projects since I didn't want ot put too much time and energy into an aggressively copyrighted IP.  Instead, I branched out into other games.  However. Aquanautica Imperialis  was one of the first big game design projects that got me on the road to game design.

If you try it out for yourself.  Please feel free to add an models, games, etc. to the Messageboard.  I always love to see what other people are up to.


Posted by Blood and Spectacles Publishing at 1:26 AM