The ongoing Photobucket Saga has left me with some good and bad news.  The Bad news is some of my pictures for Jugs: A Game of Big Stompy Robots, The Games: Blood and Spectacles, and All Quiet on the Martian Front games appear to be non-recoverable due to the way Photobucket has divided some pictures into Recent Uploads and Library.  I can download my Library, which I have done.  However, I can not seem to download any pictures stuck in the Recent Uploads bucket.  The funny thing is these pictures are in no way "recent" unless you have a really bizarre definition of recent.

However, on the plus side I have recovered some old photos of my family, old games, and projects that I only dimly recall.  This walk down memory lane has prompted me to post some of these old photos.  Sadly, I don't recall anything that was happening in the games so these will not be my "Traditional" style battle reports, but I think they can still be fun.

First up is a game that my daughter and I played a lot about 7 years ago.  It is basically a re-skin of Gorkamorka.  However, instead of being set in the dessert, it was set on a world mostly composed of water.  I think it was called Da Deff Island Skirmish and it was set in the Battle for Ammoris campaign system from the Ammobunker forum.  The game had ork gangs of scavengers fighting with human criminals and pirates for scrap in the shallows of the Deff Island chain on the planet Ammoriss.  It is a skirmish campaign game with all the usual stuff like XP, Injury, gang building, etc. 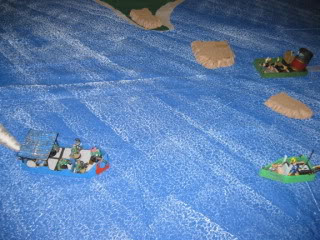 You are probably wondering why there are Flamer templates behind some of the boats.  As they moved, the flamer template represented the wake that they created.  Boats passing through wake had modifiers for shooting and moving.  Here we see Da' Lucky Gitz approaching the Eagle Eye Pirates in the Shallows to do battle. 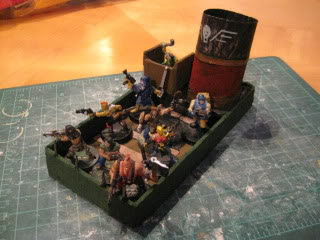 You can see that the Eagle Eye Pirates are a mix of Necromuunda and DemonBlade models to represent the pirates.  The boats themselves were homemade from cardboard and various found items.  The water matt is simply a blue table cloth with a second different blue coat sponged on. The islands made the same way using a brown and green tablecloth, than cut and layered together.  The whole seascape cost less than $10 and is highly portable. 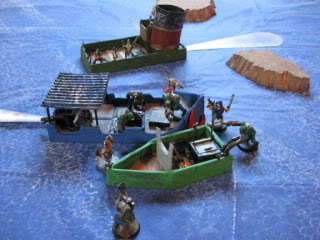 Here you can see a few key aspects of the game in action.  The first is ramming other boats, the second is boarding other people's boats with your crews, and the third is tossing models into the drink.  They can then swim at reduced speed. 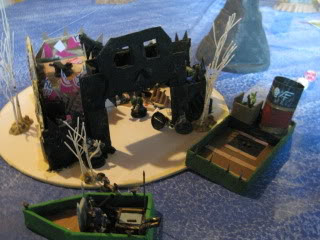 Here is the Eagle Eye pirates attacking a fort of Da' Lucky Gitz in the shallows.  The fort is made out of card and found materials.  To this day I still have not finished painting it up! 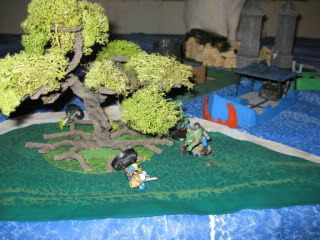 Despite being a game about boats and there crews.  You still can make landfall.  Often key pieces of scrap is found on islands or the shoreline and you need to get your boat over to it before your enemies. 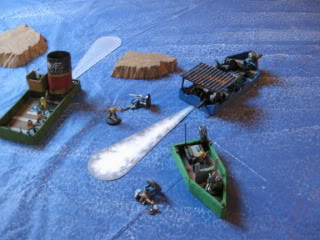 That pretty much covers some of the basics.  The game played well in our campaign, and we got about a half dozen games or so under our belt.  Like all campaign games, sometimes things just don;t go right for one side or the other.  However, there is an "Underdog" metric that can be used to help a flailing team.  Again, it is pretty much just a mod of Gorkamorka so you will want a copy of those rules to fully play Da Deff Island Skirmish. 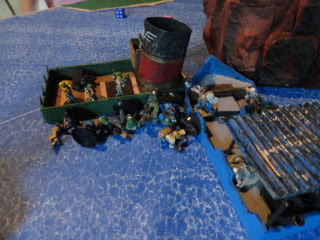 There are also rules for Planetary Defense Force Troopers in the game as well, found in the Operation: Hemlock booklet.  Those play a bit differently but I have never really had a chance to try them myself.  These were some of my first foray's into game design, so try them out and let me know what you think.  If you like Gorkamorka or Specialist Games in general I think you will like it.
Posted by Blood and Spectacles Publishing at 1:28 AM