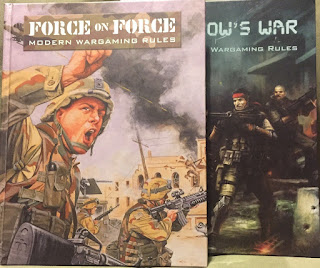 When Osprey was first entering into the game publishing business, they didn’t try to do it alone.  Instead, they struck a deal with Ambush Alley games to publish some of their core rulebooks.  The details are inconsequential and since I believe the two have parted ways.  What is of note is that a series of rulebooks for Modern warfare and a rulebook for Sci-fi were released.  Both were hardback books and Force-on-Force even got a series of campaign specific soft-back books as supplements.

For me personally, these were incredibly important works.  I had been starting to move around beyond the usual players in the wargaming world and was looking for something different.  I found these two works and immediately realized I had found that something.  Around the same time I also found Stargrunt and Dirtside II as well.  As you can imagine, finding all of these new realms of sci-fi possibility was very eye-opening to me.

On reflection, I see these games as having a shared philosophy or lineage in design; a lineage that tried to extrapolate the challenges of Modern/post-Korean War to the tabletop.  I can’t speak to how accurate they are in that task.  They all force you to take a different approach to how you play a game than other popular game approaches.

Tomorrow’s War and Force-on-Force use the same base rules to accomplish their core game play.  Therefore, I am combining them into a single review.  As needed I will call out differentiation when needed.  I have read some people complain about the opacity of these rulesets but I find the way they are built stacks nicely together as you slowly layer on capabilities as you go.  Since I mostly use them for Infantry on Infantry actions I had no real issues using them.

Things I Like
The game has an integrated Action/Reaction system that I love.  As a unit acts, the opponent has a chance to react using a standard troop quality rating check.  This is an opposed roll so better skilled troops can beat lesser skilled troops.  The reactions are simple move or shoot actions.  Therefore, if your army grunts move up and an opponent sees them, they might take fire before they complete their move.  This leads to a round of fire between units.  This is similar to Infinity’s always active initiative approach.  There is a limit to the number of times you can react because the more you react the less effective you become at it.  When you aren't use to it, the turn sequence can be a challenge to wrap your head around but it really rewards tactical play.

The system has a very simple and unified core mechanic.  You roll a dice looking for a target number of 4+.  A 4+ is a success.  The system itself adds depth to this basic mechanic in two ways.  The first is by adding on or reducing the number of dice you roll.  So, for shooting you get a number of firepower dice for what you are shooting with and that is the number of dice you roll.  The second way is by using a dice shifting mechanic.  The game uses d6, d8, d10, or d12.  Different situations will cause your unit to shift the dice type up or down.

Despite the myriad types of troops and units out there, testing is done on a simple Troop Quality test.  This is how good a unit is compared to other units.  This is expressed in a dice type of d6, d8, d10, or d12 and is the type of dice you roll to pass a Troop Quality test.  When in doubt, you make a Troop Quality check.  The game has a few different stats such as Confidence, Morale, and Supply (Tech Level in Tomorrow’s War) but those rarely come into play.  Troop Quality, Firepower and Defense are the main stats with Firepower and Defense being the number of dice you roll.

In this game, casualties matter.  If a guy goes down you can’t just leave him there to die or remove him from the board.  Instead, you must get to him and see his status.  If he is injured, how are you going to help him?  If he is dead, that requires Morale checks and impacts your Troop Quality with a dice shift, etc.  Casualties matter a great deal and cavalier charges are suitably punished.  This is a “hug terrain tighter than your children” style of game as things in the open get red-lined real good.  Note that red-lined does not equal dead, but combet ineffective.

Things I Do Not Like
What about those other stats such as Morale, Confidence, and Supply level?  Well, they really do not serve much of a purpose and only create “If This/Than That” type of situations that may add to the “realism” of the firefights but gets confused/forgotten because you are normally using Troop Quality for everything.  I see why they were added, but they end up being extraneous chrome in most situations whne  TQ (Troop Quality) check would have been sufficient.  They are more for adding twists into a scenario than core gameplay stats.

The more chrome you add on the more complicated and cumbersome the game becomes.  Things like the “Grid”, drones, AI, combat vehicles, off-board artillery support, etc. all work alone but trying to get it all together in a single game can be a challenge.  This game excels at small unit actions in low-intensity combat.  The more you mix and match unit types, the more cumbersome and brain taxing it becomes.

Both games have a lot of chrome add-ons to try and facilitate any scenario you can come up with.  These bog the game down more than help it, but thankfully they are not required for a satisfying scenario.  Instead, they are tools that you can pull out as needed instead of trying to memorize all of them for all games.  This set of rules is a toolbox approach to help guide you when you go beyond the core rules.

Meh and Other Uncertainties
This is a “small scale” game in that the action is small unit on small unit skirmish at 15mm to 28mm skill.  You will have only a platoon to a platoon plus of guys on each side.  It plays on 2x2 to 4x4 boards and assumes that everything is in range and in the thick of things.  That means you need a lot of terrain and cover or your game will end really fast and be really boring as SAW gunners obliterate each unit at range.

Tomorrow’s War is best for human or near-human vs. near-human type encounters.  It really isn’t designed for things like Tyranids, Gundams, and other really far-out their aliens/machines.  Since psychology is a big part of the game; human and near-human fits best.  In addition, for a sci-fi game it feels a bit like “moderns IN SPAAAAAAACCCCCCEEEEEE!” and fits a hard sci-fi feel.

There are no army lists or points in this game.  Everything is scenario based.  These rules are not intended for pick-up games or competitive tournament style games.  They are intended to be played between a group of players who are committed to playing to see “what happens if?” type of scenarios.  This will not be to everyone’s liking, but I have no issue with it.  Both books come with some basic Force Orgs to get you started and some sample scenarios to play as well.  However, once you get a handle on the material it is intended for you to get out there, do your own research, and make scenarios you want to play.

Force-on-Force has solid anti-insurgency rules, and when combined with the action/reaction makes this game viable for solo-play.  Since Ambush Alley made the rules, it makes sense to me that they would have the insurgency rules well covered.  Tomorrow’s War carries them over as well.

Final Thoughts
I think these games excel at small unit skirmish games between regulars and regulars/irregulars.  The firefights are crisp, brutal, and tactical.  It works best with similar unit types vs. similar unit types with the difference being Troop Quality (i.e. infantry vs. infantry or vehicle vs. vehicle).  The more chrome you add the bigger of a bog it gets but if you select the right tool for the scenario you are playing you can avoid that issue. The engagement ranges are short and the battles sharp.  The action/reaction system will also force you to re-think tactics that have served you well in other tabletop games as they just do not work the same in these rules and that is a good thing.

I have really enjoyed using these rules and they helped me consider gameplay and design differently than I had in the past.  They have been a big influence on my thoughts about design since I started playing them.  Therefore, I recommend you pick up one of the books that meets your gaming interests.  I don;t think you need both, but some people find Force-on-Force easier to translate into a game than Tomorrow's War.  I had the Force-on-Force first so i don;t know how true that is.
Posted by Blood and Spectacles Publishing at 3:40 AM