Battle Report: Fury of the Northman - Cattle Raid in Hibernia 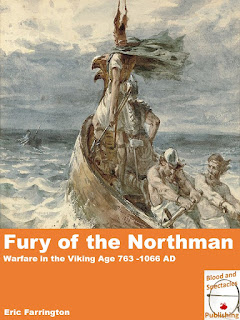 Hello faithful readers!   Today, we will be delving into the Fury of the Northman rules as I take my Victrix Vikings out against my Wargames Atlantic Hibernian Irish.

Erik Greybeard had heard the tales and seen the wealthy himself.  These islands had loot, and his fellows had told him how soft the brown frocked defenders had been.  It was incredulous to hear that they were unarmed, and had all that gold sitting around!  It was too good to pass up.

He gathered enough of his kinsmen to buy a few ships, and they had set sail.  It had been several days of wet, grey, and rainy weather but they finally found land.  The routes he had been told about were true!  His men pulled up into a cove, and found a beach to disembark on.

The first order of business would be to find food for his men.  They were tired of the dried fish and fruit, and the barreled water.  They wanted something fresh to dine on.  He heard the bellow of a cow in the distance and his mouth watered.  His men looked expectantly up into the dark woods and rolling hills.

Of course, the approach of his ships had been seen.  The shepherds ran back to the local village and told the chief of the newcomers.  He sent runners to the other nearby hamlets, and soon the local king had gathered the men folk to defend their lands.  King Ercc went forth to meet the invaders.

Mission:
The Vikings will be the attackers as they go on a Cattle Raid against the Irish.  They will be attacking as Dusk Approaches as the complication.
Forces:
Since this will be a Cattle Raid, the Vikings are allowed 10% more points then their Irish foes.
Erik Greybeard's Vikings:
Nobles
- Shieldwall
- Boar's Head
Warriors
Warriors
- Shieldwall
Militia
- Shieldwall
Skirmishers
King Ercc:
Warriors
- Heedless Charge
- Throwing Spears
Warband
- Heedless Charge
-Throwing Spears
Skirmishers
- Throwing Spears
Skirmishers
-Throwing Spears
Slingers
-Skirmishers
Slingers
- Skirmisher
Set-up:
Today we are using a 72MU by 48MU board.  1 MU is equal to 1 inch.
Per the rules for the Cattle Raid, we rolled up 4 cattle to be herded up and taken off the board.  Both players can deploy two cattle, at least 18MU in from the board edge, and 6 MU from any other cattle.
In addition, we placed terrain per the rules.  We split the board up into a grid with 6 spaces.  We then rolled off per the chart.
Grid 1= 1 Level Hill
Grid 2= Difficult Terrain (Field)
Grid 3= Hedges and bushes
Grid 4 = No terrain
Grid 5= Difficult Terrain (Field)
Grid 6= Difficult Terrain (Woods)
Both sides place their cattle.
The Vikings choose to deploy on Grids 1-3.  The two sides take turns deploying a unit until the following deployments are set.

Turn 1:
As dusk approaches, both commanders gather their Ferocity Points.  Greybeard chooses to spend 4, while Ercc chooses to spend 3.  Greybeard goes first.
Both sides rapidly rush forward to try and get their hands on the livestock.  The Viking Skirmishers spend the last Ferocity Point to move unimpeded by hill and field.  Their warriors comrades lag behind in the field.  The Irish are content to watch the rest of the Viking force move forward.
With the baying of hounds, the Irish move forward, their skirmishers and slingers pushing out ahead.  The warriors seem content to deal with the left most cattle.
The sun does not begin to set yet.

Turn 2:
Both commanders again collect their Ferocity Points.  The Irish choose to bid 4, and the vikings bid 3.  This time the Irish go first.
The Vikings watch as the Irish manage to leap forward and collect 2 cattle early.  The Slingers on the Irish right secure 1, and the King himself secures another.

Viking skirmishers secure one of the Cattle on the Irish left.  However, they are left exposed to do so, and there Warrior back-ups are lagging in the field.  Meanwhile, Greybeard and his nobles switch into the Boar's Head as they approach a cow.  The Militia and Warriors move up to support them in open order.
With the roll of a 6, the sun will begin to set! Dusk has begun!
Turn 3:
Both commanders again collect their Ferocity Points.  Greybeard spends 1, while King Ercc spends 3 to go first.
The Irish slingers around the cattle open fire on Greybeard, but due to dusk they find that they no longer can get a good look at the target.  They are too far in the setting sun!  The same issue hampers the Irish slingers on the opposite side of the board when they go to Shoot at the Viking skirmishers.
At this point, Greybeard attempts to interrupt.  However, he fails to take command and the Irish stay in control of the initiative.
With that, the Irish warband commit a heedless charge into the Viking skirmishers.  The Irish warband loses two courage, and starts to waver.  They push the skirmishers back 2 MU and manage to drive off the skirmishers and secure their cattle.  However, Viking warriors are lurking nearby in the field.
Greybeard again tries to take control, but loses to the Irish on the roll-off.  Irish skirmishers on the far right dash forward  and get between the Greybeard and his nobles and the Irish slingers with the cattle.  Meanwhile, on the opposite side, King Ercc and his warriors move up inbetween the fields.
The Irish cede control of the initiative to the Vikings.  Eric Greybeard and his Nobles cahrge recklessly forward and clip the Irish skirmishers, as King Ercc and hoped.  The Irish are pushed back 1 MU, and turned around to flee for their lives!
Behind the Nobles, the militia Vikings grab a cow and circle around it to protect it.  The Viking Hirdmen move up to cover the gap between the fields, and form a Shield wall.  The last group of warriors struggles through the field towards their objective.
End:
The Viking Skirmishers and a unit of Irish Skirmishers are removed from the battle as they rout.  The Irish units that see their comrades flee, pay it no heed.  Meanwhile, the warriors in the field begin to waver from seeing their skirmishers flee from the attacking Irish.
Turn 4: Final Turn
This will be the final turn as night begins to fall.  Both King's gather their Ferocity Points, with both armies down a unit.  The gives the Irish 5 and the Vikings 4.  Eric Greybeard bids 2, and King Ercc bids 3.  The Irish will be going first again!
The Irish slingers covering the cattle fire at the oncoming Nobles, who shrug it off by sheltering behind their shields.  King Ercc spends a Ferocity Point to rally his warband from wavering, and fallback away from the Vikings.  The rest of the Irish hold their positions, and turn control of the board back to the Vikings.
The Viking militia fall back towards their camp with their prize, but they will not be fast enough to leave the board.
In frustration, Eric Greybeard's Boar's Head smashes into the Irish Slingers by the cow.  The slingers do not stand a chance, and are easily routed.  The Nobles take command of the cow, but are stuck in the middle of the board.
The vikings in the field manage to secure a third cow, but will not have enough time to get it to a board edge.
End:
The Irish slingers flee for their lives, and that leaves the Irish down 6 points, or about 25%.  However, no Irish units are in a position to see them flee, so no wavering checks are needed.  However, at 25% losses,  each Irish unit needs to take a Collapse Test.  The last Irish skirmisher unit flees the board in terror.  The rest hold steady.
Conclusion:
This one goes down to the points, as there is no clear winner!
The Vikings eliminated 8 points worth of Units, but scored no points to cattle.  They lost a 2 point skirmisher unit, so they have a total of 6 points.
The Irish have 2 points for destroying the Viking skirmishers, and 2 points for retaining 1 Cattle.  However, they lost 8 points of units and end the game with -4 points.
The Vikings manage to drive away the Irish far enough, that they can get their captured cattle back to camp in the darkness.  However, behind every tree or shrub they pass, they can sense the angry eyes of the Irish on their backs.   By securing some cattle, Eric Greybeard is able to keep his men's bellies full, and the successful battle keeps their spirits high.  With the measure of the Irish defenders taken, Eric Greybeard was eager to raid further inland.
Well, I guess King Ercc should have challenged those Viking Warriors in the field for control of the Cattle after all.  I was afraid of having to take a late game Collapse Test from a routed unit, and I ended up needing to anyway!  I am not sure challenging the cow by the field would have made a difference.  I also should have not used my skirmisher unit as a speed bump on those Nobles.
In hindsight, I should have placed my two cows in difficult terrain, and then used my enhanced ability to skirmish to get there faster, and the terrain to help bolster my weaker armor, or to sally out of.  This would have hindered some of the Vikings biggest advantages, armor and formations.  In addition, the Dusk Approaches complication changed the dynamics of the game a lot by minimizing the effectiveness of my shooting, but also reducing the games length!  That really changed the normal rhythm and added a sense of urgency to the whole thing.
Well, lessons learned on how to play the lighter, skirmishing focused force for next time!