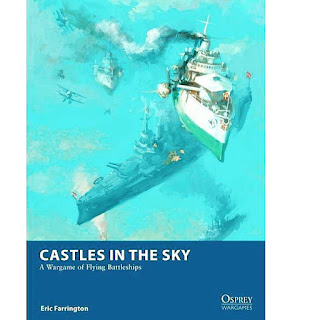 Welcome back to the Indo-China campaign for Castles in the Sky from Osprey Games.  In Part II, the British tried to unsuccessfully blockade the French to stop vital repair supplies getting to them.  However, the French were able to break out from the Blockade, but at the cost of one of their destroyers exploding.  The British are in the lead with 2 Campaign points to 1.  The first team to 7 will trigger the "Final Battle" scenario.   The British decided to switch their strategy to the Offense, while the French stay on the Defensive.

Commodore Duckworth, of the Royal Navy; grew impatient with the French recalcitrance in the region.  He decided to step-up patrols and aggressively began to probe on the borders.  However, this caused increased wear-and-tear on his air ships.  This aggressive activity forced the British to cease operations and re-supply at the neck of the Kra Isthmus and rendezvous with Siam forces there.

French Commodore Aubre was provided intelligence on this rendezvous by his spymasters.  Aubre decided to throw caution to the wind and take the chance to strike the British with strategic surprise.  The Commodore decided to lead this attack himself in the Camot.  With haste, the French airships slipped their moorings and made steam for the Kra Isthmus across the Gulf of Thailand.

We rolled up a Surprise Attack which is a battle scenario as opposed to a Raid!  That means we can bring out the Battleships to fight!  Both sides get to choose over 25 Operational Value but can not have more than 3 points separating their total fleet costs.  The entire remaining and deployable French fleet is only 24 Operational Value, so they will all sally.

Despite the British being on the offensive, the scenario roll dictated them to be the defender.  The French will get the drop on them this time!

HMS Malaya- Commodore Duckworth- Command 2
Queen Elizabeth Class Battleship
HMS Achilles- Captain Durham- Command 4
Warrior Class Cruiser
HMS Arrogant- Captain Knowles- Command 2
Arethusa Class Light Cruiser
HMS Medusa- Captain Butler- Command 2
Active Class Light Cruiser
HMS Hasty- Commander Rawley- Command 2
Bull Finch Class Destroyer- Sky Mines
That is 27 Operational Value
L'Aire National
Camot- Commodore Aubre- Command 4
Charles Martel Class Heavy Cruiser (Battleship)
Tourane- Captain de Genouilily- Command 2
Descartes Class Cruiser
Tonkin- Captain de Vence- Command 2
D'Iberville Class Cruiser
Hue- Captain Senez- Command 2
D'Iberville Class Cruiser
Fantassin- Captain Valjean  - Command 4
Chasseur Class Destroyer- Torpedo
Tromblom- Commander Morice- Command 2
Chasseur Class Destroyer - Sky Mines
Set-up
For the French Surprise Attack, we are using a 48MU by 72MU board.  We determined random terrain per the rulebook chart.  The French will be on the side with grid 1, 2, and 3, and the British will be on 4,5, and 6.
1. Mountain (alt 3)
2. No impacting terrain
3. Hills (alt 1)
4. Hills (alt 1)
5. No impacting terrain
6. No impacting terrain
We rolled for complications, but none will be impacting our game today.
The British have to deploy in a band between 6 and 12 MU away out from their board edge.  In addition, all of their airships start the game landed and need a successful Command Check to activate, and then take-off.  Oh boy!  They try to clump up in the middle for mutual protection, but far enough away to stay mobile.  The Medusa pairs with the Malayan, and the the Hasty pairs with the Achilles.  The Arrogant is on its own as a roving gunboat. 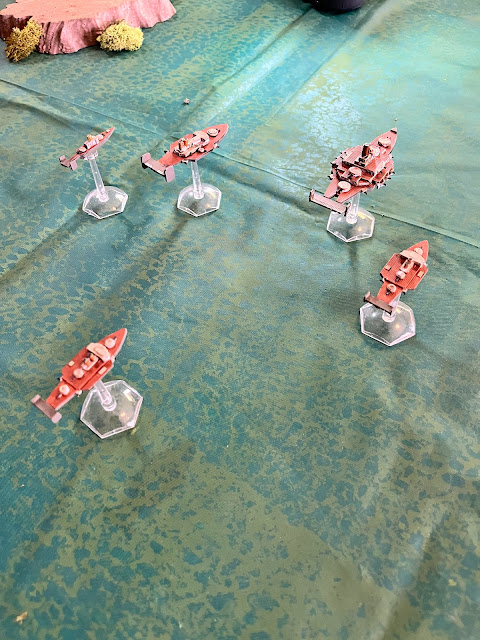 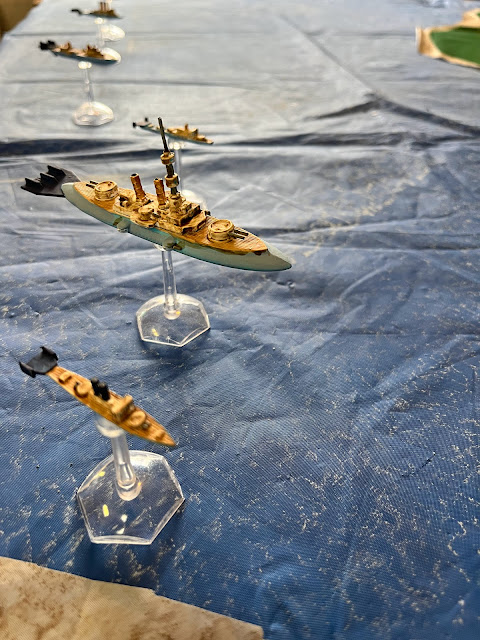 Turn 1:
The French score 3 commands to 2 British commands.  They choose to go first.
Move:
The Camot drops altitude to speed up, while the crew of the Achilles manage to power up and take-off!
The rest of the French power forward trying to get into range before the British can take-off and get to combat speeds.
However, the British are successful at passing their command rolls, and begin to take-off.  This puts them all at speed 2, altitude 1.
Battle:
Everyone is just out of range to open fire.
End:
None 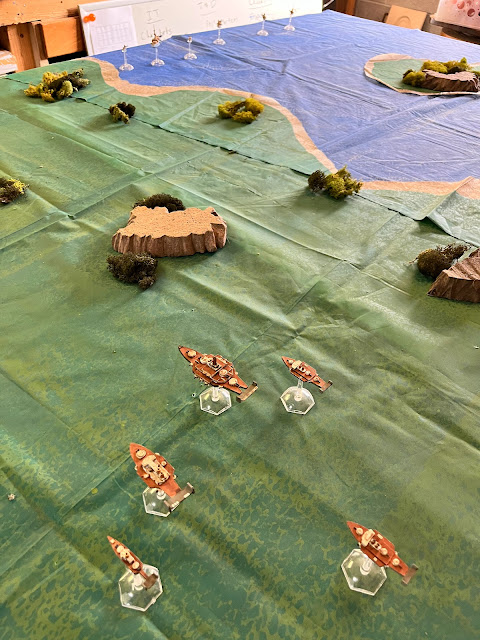 Turn 2:
Both sides score 1 individual command, but the French retain the initiative and decide to move and shoot first.
Move:
The Camut begins a turn to try and cross the T of the HMS Malayan and avoid her broadside guns.  The Malayan makes a All Ahead Full order to double her ability to gain speed, and manages to thrash up towards the French altitude.
The rest of the French drive forward to get the British into range.  The Destroyers maneuver to stay with the Camut and provide covering fire.
Melee:
The Camut checks the range, and decides to hold her fire to avoid a potential misfire due to the range.  The British do not hold back, with the Achilles and Malayan finding the range with their forward guns and hitting the Camut for two Friction.  The HMS Medusa also fires on the Tromblom and causes 1 Friction. 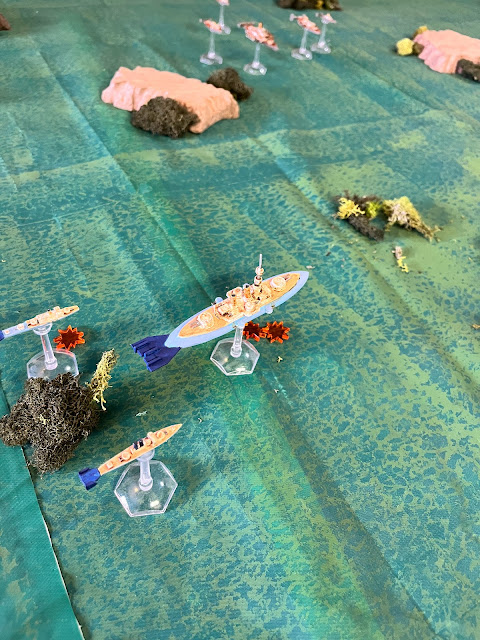 The rest of the French fleet holds their fire.
End:
There are 3 Friction on the board, and the two Commanders easily get it cleared away.
Turn 3:
This time the British win initiative with 3 Commands to 1.  They opt to move and shoot first.
Move:
The HMS Malayan thrashes up to Altitude 3, even with the Camut now.
The French support cruisers continue forward to press their attack.  Meanwhile, the remaining British cruisers try to gain height and speed, mostly at Altitude 3.
The French stay 1 band above them as the Camut and her escorts go up.
Melee:
The Achilles starts by firing on the Camut, but fails to find the mark.  However, the the cruiser passes an Ammo check to keep her main battery firing.
The Camut fires for Effect on the Malayan, and manages to cause two Friction hits with her bow guns.  The British Battleship fires back and causes two Friction in return.  The French warship also fires her Air Torpedoes at the Achilles, but the combined Point Defenses of the Hasty and Achilles down them before they can hit the cruiser.
A Torpedo barrage from the Fantassin leaves two friction on the Achilles, after her Point defense destroys 1, and a second pings loudly off the ship's armor.
The Medusa hits the Tromblom for a point of Friction as the French close.
The Arrogant's point defense gunners easily swat away a pair of Air Torpedoes from Tourane. 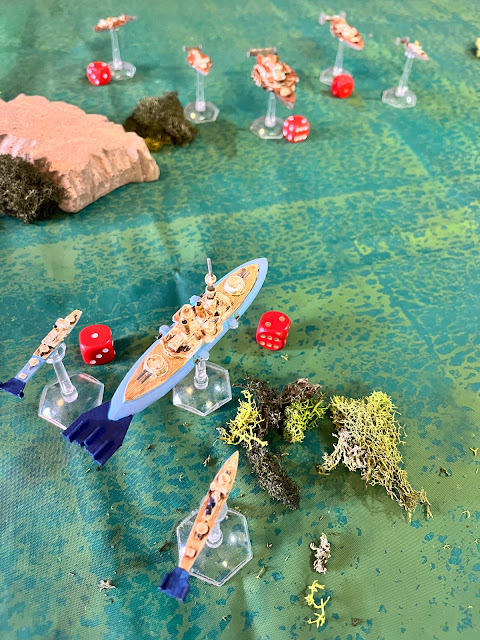 End:
There is 11 Friction on the board.  9 of which will be removed.  The British remove 6, and the French 3.  This is enough to clear for the French, and the British decide to leave 2 on the Arrogant.
Turn 4:
Both sides score only 1 command a piece, and the British maintain the initiative.  They decide to move and shoot first.
Move: The HMS Malayan gains speed, and turn to port, hoping to catch the French Camot in a close range broadside, or at least force her to maneuver to avoid it.
The French Tourane, Hue, and Tonkin continue to close on the floundering Arrogant, who tries to gain some altitude, but is now at minimum speed.
The Medusa stays with the Malayan for mutual support. Meanwhile, the Tromblom buzzes the Malayan and prepares to drop her sky mines.
The Achilles and the Hasty continue to slowly climb, while the Camot shifts to cross the Achilles T at an altitude band above her.  The Fantassin stays with the Battleship for support.
Battle:
The HMS Malayan tries to make a Fire for Effect command, but fails to ready herself in time.  However, it was not needed as 5 of 6 dice hit.  Commodore Aubre quickly decides to use his last command to Prepare for Impact.  He successfully negates all the hits, but still has 5 Friction on his ship.  All commands have been used for this turn by both sides.  In addition, stern light battery fire failed to damage the Tromblom as the gun's ran out of ammo.
The Tromblom drops 4 sky mines right on the Malayan.  However, the Point Defense gunners on the HMS Malayan and the HMS Medusa destroy them all with Point Defense fire.  Light battery fire from the Destroyer fails to even daze the Achilles in front of her.
The Medusa fired on the Tourane, and landed two Friction.  Return fire from the Tourane caused two hits on the Arrogant, and two more Friction.  While the Medusa also took 2 Friction.  In addition, the Tourane's starboard medium battery jammed up due to rapid firing.
The Achilles firs on the Camot with limited effectiveness from its forward battery. The shot causes 1 Friction.
The Tonkin fires a spread of Air Torpedoes at the Arrogant.  The British Point Defense miss the oncoming torpedoes, and three detonate against the ship.  One hits something vital beyond the armored belt.
The Hasty fires on the Camot, causing one more friction from her light battery. The French warship is up to 7.
The Hue fires a spread of torpedoes at the Arrogant, and the British PD gunners are ready this time, and take out two.  One more hits the ship, but fails to cause damage.
The only ship left to fire is the Camot.  The Heavy and Medium batteries target the Achilles, while the light battery fires on the Hasty.  The Achilles takes 5 friction and the Hasty 1.  The Hasty takes 1 hit, and the Achilles takes 2. 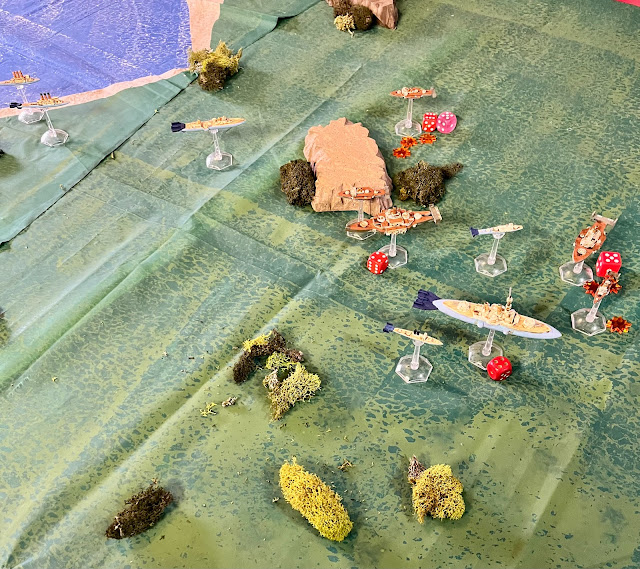 End:
HMS Hasty has her screw fouled in addition to losing 1 armor.
HMS Achilles loses two armor and has her rudder jammed.
HMS Arrogant loses three armor, starts on fire, and is crippled!
The Arrogant starts to sink and loses 1 altitude and 1 speed.
The HMS Arrogant strikes her colors, unable to continue the fight.
Repair crews on the Arrogant manage to put out the fire, and the Achilles unjams her rudder.  The Malayan and the Tourane manage to unjam their batteries.  However, the HMS Hasty still has a fouled screw.
The board has 29 Friction,  British can only remove 3, and French can only remove 5.  The British keep 11 on the Arrogant, 4 on the Malayan, and 5 on the Achilles.  The French keep 4 on the Camut.
Turn 5:
Both sides score 2 Commands, and the British keep the initiative.  They decide to move and shoot first.
Move:
The HMS Hasty slowly tries to get past the French forces, in a position to launch her sky mines.
The Tourane turns into the main British force, but at Altitude 5.  That is two above most of the stalling British forces.
The HMS Medusa is given leave to break formation, and she dives and speeds up, coming back around on the Camut's Starboard stern.
The Malayan and Achilles both are stalled due to Friction, so can not move.
The Tonkin and Hue reload and turns towards the Malayan.  However, they are at Altitude 5 and 6 respectively to the British 3.
The Camot loses Altitude to keep from stalling and gain speed.
After her mine laying run, the Tromblom scurries to get back into formation with the Camot.  The Fantassin slows to stay with her charge.
Battle:
The HMS Hasty unloads her mine payload at the Camot.  The French Point Defenses were caught happing, and only tagged 1 of the mines.  Two others exploded against the battleship, but did not cause damage.  The last stayed floating looking for a target. 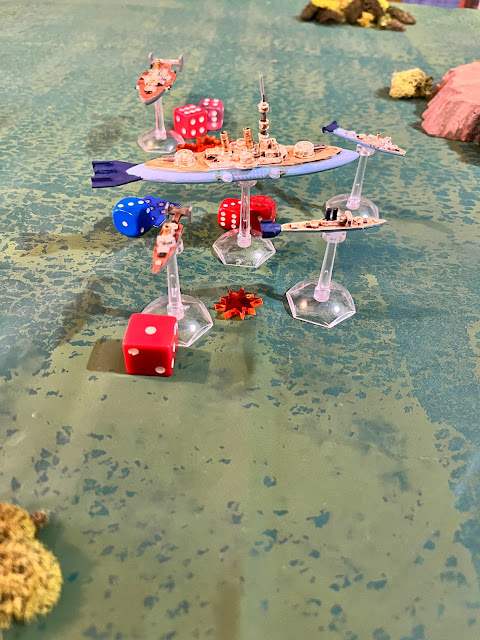 The Tonkin fires a spread of torpedoes at the HMS Malayan.  Her point defenses hit 2, but three more look like they are going to hit.  The Commodore calls to Prepare for Impact, but the crew does not respond in time.  Three hit the battleship, and one manages to buckle her armor!  The first time in the campaign! 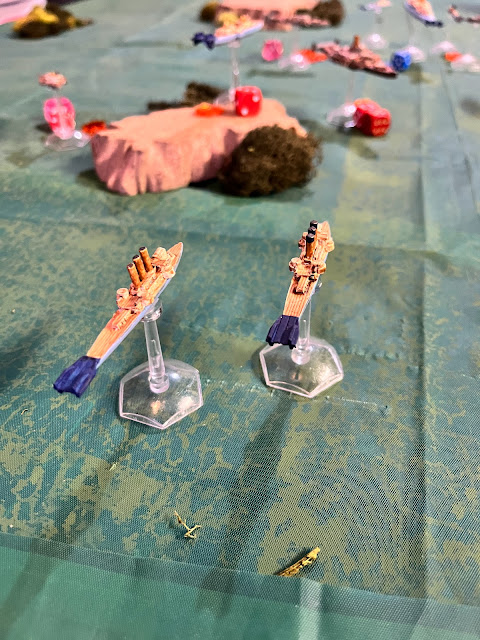 The HMS Malayan does manage to swivel her turrets and fire at the much higher Tourane.  One manages to hit the French ship despite the height, size and speed.  The Tourane has 3 Friction and 1 hit.
A torpedo barrage from the Hue at the Malayan only causes 2 Friction.  Most of the torpedoes simply missed the battleship.
The Medusa hit the Camot for 1 Friction from her main gun.
The Camot opened fire with her Broadside on the Achilles and hit her for 5 more friction and 2 hits.  In addition, her light batteries hit the Hasty for 1 Friction.
Return fire from the Achilles hit the Camot for one Friction with her forward guns. 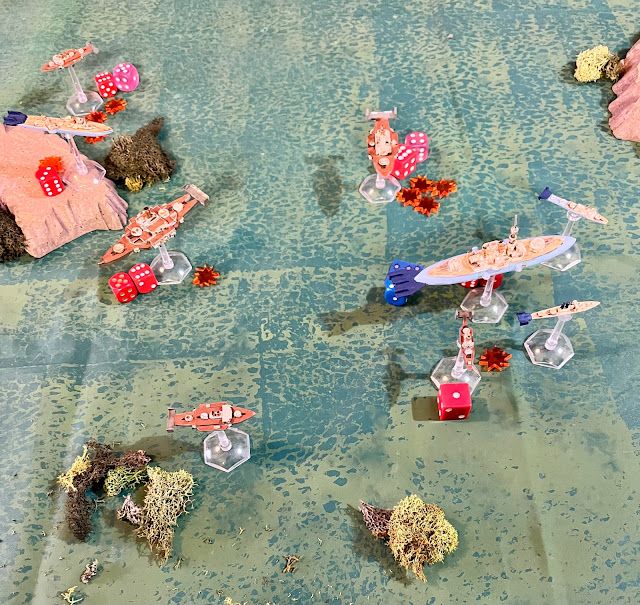