As we approach a climactic final battle on Baron's Rest in Operation: Hemlock, I started to rummage around in my boxes of minis to find out what I had for it.  Initially, I wanted a decent size battle of Rampant Galaxies, but decided by the time I ordered and painted all the minis for it.... well.... I didn't have 3 years to wait for that climactic battle.  Paper flats on the table just didn't seem the part.  So, I figured we will just need a big battle of Rampant Stars instead.  So off I went to see what I had for the Imperial and Ork forces.....

That's when I dug out my old Paper Armored Company from Warhammer 40K 4th edition  or so?  I Think it migrated to 5th, but only had a couple outings.  I made it more out of a labor of love.  At the time, I had no money, but plenty of time.  I also had access to a lot of cardstock and a grey scale laser printer.  I designed, modified and built something like 30+ Imperial vehicles of various styles and stripes out of cardstock.  It was enough for about 3 Companies of vehicles using the Chapter Approved Armored Company list in White Dwarf.


This was a very polarizing army.  People either loved it or hated it.  There was not much inbetween.  There was no doubt, that despite all the inexpensive paper and found materials, that it took a ton of work to build.  Each component required the design work in MS Paint (some were basedon existing templates I had found online, and some I designed myself), coloring in MS Paint, printing, cutting, and assembling.  There was a lot of trial and error to ensure parts fit together properly, but once they did, they were re-usable over and over again so it was easy to expand and build on what was made.
Time has caused some wear and tear to the models.  Mostly things like Heavy Bolter barrels, and other small weapon barrels, smoke launchers, etc. However, those small details are easily replaced with white glue.  These models have moved across country three times, but are still in relatively one piece.

Sometimes, I think about making the jump to 3D printing, but the thought of learning the software, learning the process of 3D printing, the effort of mastery, I just do not think I have it in me anymore.  Around this same time, I also started to learn how to sculpt with GS, FIMO, etc. too.  It is what helped keep my in the hobby when my wallet couldn't.  Now, I just don't think I could muster the energy and time to do something similar with 3D printing, sculpting, or papercraft.


I hope you enjoy the pictures I took as I started planning a big battle for Operation: Hemlock.  Maybe some of these will hit the table again?  Maybe not.....

For those who stuck around to the end, I also have some bonus pictures of an Ork Stompa Tribe I was building but never finished before the bloom of warhammer 40K went off the rose for me.  Not using all those old 40K models is what prompted me to develop the Rampant Stars/Sun/Galaxies series of games in the first place. 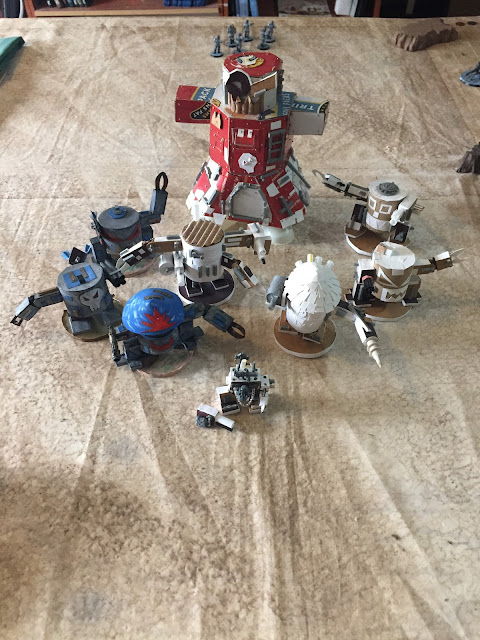 This army was going to be 6 Killa Kanz, 1 Deff Dread, a Big Mek, and a Stompa (Counts as Battlewagon) loaded with Ard Boyz.  Even the Big Mek was being built from scratch in this army.  As you can see, it was never fully finished.  This one also survived 3 house moves so far.... so one day maybe it will actually get completed?  Who knows?

Or our Wargames Vault Page:
https://www.wargamevault.com/browse.php?keywords=blood+and+spectacles&x=0&y=0&author=&artist=&pfrom=&pto=
Posted by Blood and Spectacles Publishing at 2:43 AM