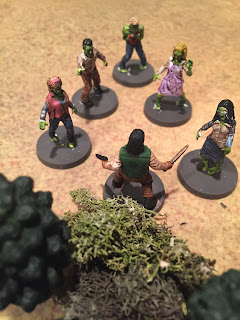 Since the COVID-19 crisis is still ongoing as of this writing, it makes some sense to me to keep writing about Solo-warming.  So far in the series we have talked about gaming the opponent and deployment.  Today, we are going to talk a bit about the value of scenarios in solo-wargaming and how to make them work.  This is not the first time I have talked about scenarios, so you may also want to reference how to use them as a tool for balance, and how to go about designing a historical scenario.

The key factor when trying to design a solo wargame is to create surprise for the player!  Typically, in a wargame surprise is created bu playing against another person with their own thoughts and ideas about how to achieve their objectives.  Obviously, in a solo-environment that type of surprise is not possible.  Therefore, the system itself needs to generate the surprise a game needs to be interesting for the solo player.

Scenarios are an excellent way to help add flavor and decision making to your solo wargames.  As the player, you need to balance completing the scenario objectives with killing off all your enemies.  Ideally, you will have to choose between (at minimum) three choices; killing enemies, protect your own forces, or achieve the objective.  These three points should be counter to each other. 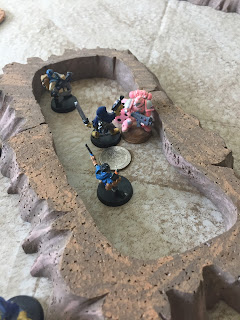 Mission Matters
Let's consider the humble Space Hulk game.  There are a variety of missions, of forcing you to move between unknown points of the board while enemy gribblies close in on you from all sides.  This game demonstrates the decision making process for a solo-scenario very well.

3. The mission often forces you to go to X location and then Y location so you need to think through the best way to get from A to B with the least amount of distance, chance of encounter, etc. to get there.

You are always balancing the three main choice criteria during a game of Space Hulk.  You should either be killing enemies, protecting your forces, or accomplishing the mission.  There is a constant decision to be made from turn to turn, and decision making leads to fun and replayability.

As you can see, the scenario is the third pillar of the stool.  If there was no mission to accomplish in Space Hulk, you would just castle up in the easiest to defend room and kill genestealers until time ran out.  You can see the value of the mission to force movement and decision making.  However, the mission alone does not drive game play, as it is also impacted by factors such as enemy deployment style and how the enemies act.  Therefore, it is a challenge to think of scenario separate from the overall mechanics of the game.  They must be integrated together.

Anatomy of a Scenario
Here are some key things a scenario must do in a solo-wargame:

1. Force movement
A good scenario in a Solo-wargame must force movement from the solo-wargamer.  The natural tendency will be to castle up and let the enemy come to you.  The scenario will force a player to move, and therefore think about how they are moving and supporting their troops. 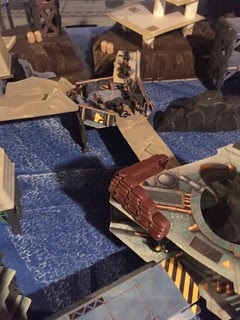 2. Time Restriction
Again, the idea here is to add tension to create "race against the clock" situation where you not only have to defeat the enemies, but also time itself.  This will help mitigate castling up, but also forces players to decide if they should detour to destroy a deployment zone or simply bypass it and hope they do not regret it later.  Decisions are the key, and adding time urgency forces decisions.

4. Complications
These are elements that make the mission more challenging as play progresses.  This could be as simple as where as enemies deploy, to special rules about terrain, or how players can interact with civilians.  These are little bits of Chrome or game hooks that add flavor but also friction for players to overcome.  They add replayability to the scenario as it won't always be the same mission even though the high level goals maybe the same.

There are a number of way to add complication to a scenario, they may be stated at the beginning of the mission, triggered by certain events, triggered by timing, or triggered by the players themselves.  No matter what type of complication is used, the goal is to add surprise, decision making, and replay factors to a solo-game. 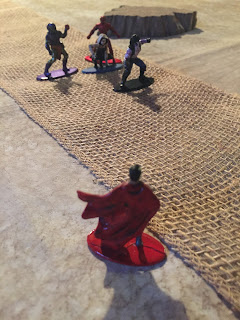 6. Opponents
Good scenarios also set-up good opponents.  How they deploy and act is a critical feature of making a strong scenario.  Too many opponents all attacking the same way may be overwhelming, while trickling opponents onto the field may not be challenging enough.  A good scenario creates a balance of enemies to objectives to make the scenario challenging but not impossible. 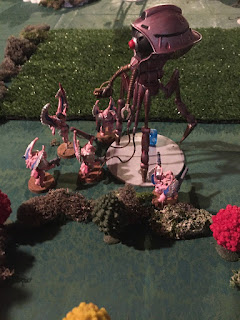 Conclusion
Scenarios are critical to a successful solo-wargaming experience.  They are necessary to create the proper conditions for game play.  A good scenario will force key decisions to be made, create added play value, and force the player themselves (You) into thinking about how to best balance the needs of the mission, survival of your force, and killing enemies!  Without a good mission, solo-play becomes stale and unrewarding very quickly.

Posted by Blood and Spectacles Publishing at 2:31 AM