Men of Bronze: Armies in the Field- Spartans, Corinthians, Macedonians

I have been slowly working on a few armies for Men of Bronze over the last 18 months.  My armies are all 28mm Victrix models based on 25mm bases.  Some of the bases are from Victrix while others are just washers.  My main paints for this project have been Army Painter, with a spattering of Big Box retail craft paints and brushes.

The armies were based on the sample armies found in the main Men of Bronze rule book.  Therefore, they are designed to fit standard point games, and use 1 inch as a base width.  Of course, the game itself is base and model agnostic, so you can do something totally different with your armies.

First up is the Sample Spartan army from the book.  I think most people are familiar with the Spartans.  Hailing from Laconia they had a rigid and structured caste system.  Spartiates were the citizen soldiers of the city-state.  They were raised from a young age to be Hoplites, and many considered them the best soldiers of the ancient world.  The Spartiate hierarchy was held up by a slave caste called Helots and a network of nearby villages and towns called the Perikoi.  Helots were slaves while the Perikoi were free men.

My Spartan army is composed of the following units: 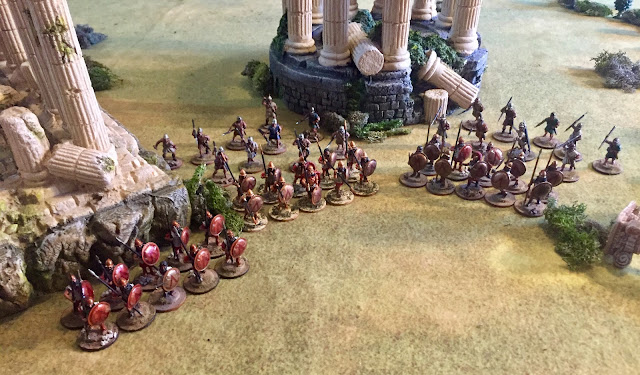 In the picture, the Perikoi are on the left, then the Spartiates with Psiloi behind them.  This army represents a more elite focused army where the Hoplites need to do all the heavy lifting of combat.  However, it is less mobile and less flexible as there are few Arete Points generated to spread around.

Next up is the Corinthian Army.  Corinth was a rival city-state to Sparta on the isthmus of Corinth.  Access to the Peloponnese and Lacodamia over land was over the isthmus.  Therefore, the area of Corinth frequently saw conflict with Sparta.  The most well know was probably the Corinthian War.  However, Corinth was also a well known Naval power and was often a rival to Athens as well.

The Corinthian Army is composed of the following units and match the sample army list in the book: 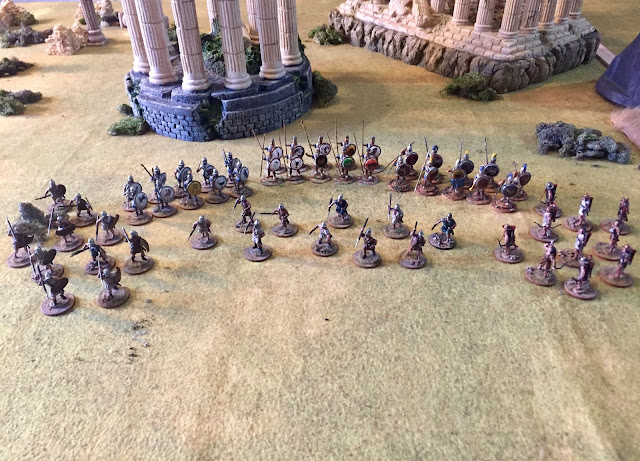 The Macedonians were based to the North of what is commonly considered "Classical Ancient Greece".  Many of the City-state based Greeks thought of the Macedonians as semi-barbarous.  The Macedonians had their own royal line and tended to be a Monarchy supported by a landed nobility.  Typically, their are two major military forms for Macedonia.  The first if often refereed to as Pre-Reform Macedonia.  The army lists and sample army in the book are from the Reformed Macedonian army based on the changes made by Phillip II.  These changes allowed him to grow in power and eventually subjugate much of mainland Greece.  This army was also used successfully by his son Alexander the Great to conqueror the Persian Empire and beyond.

The Men of Bronze rules have two lists that I tried to build my army for.  The first was in the Sample army list section.  It included the following units: 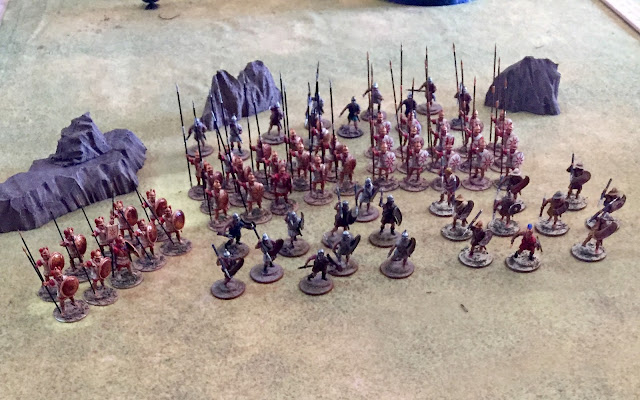 You can see this list here.  You can see the Peltasts as a forward screen, then the two Macedonian style phalanxes, the light hoplites on the left, and then the Psiloi in the back.  This force is a hard hitting force, with enough light troops to keep the enemy lights at a distance, and handle rough terrain.  It is relatively flexible with a strong fighting core.

In addition to this list, the rules also have a historical scenario featuring the Macedonians.  The Battle of Chaeronae saw the Macedonians crush the last resistance of Mainland Greece and bring them under Macedonain control.  The list for his army in the booklet is: 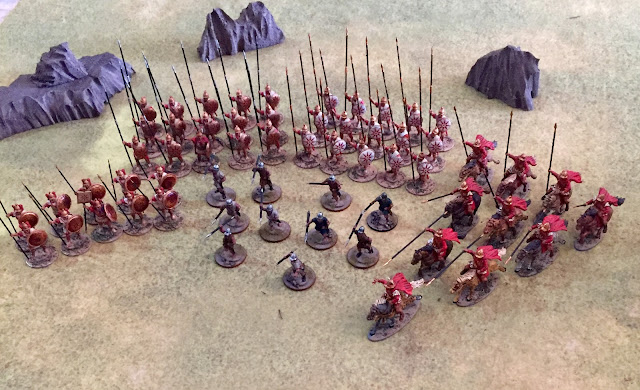 This is the army that was used in the IF battle report.  It has few light troops and less flexibility, but adds another powerful striking arm that allows for Alexander's favorite hammer and anvil tactics.  However, this army has bigger challenges with rough terrain and Arete Points.

You can expect to see these guys showing up on the blog, Facebook, and Instagram a lot over the next few months.

Posted by Blood and Spectacles Publishing at 2:12 AM