Battle Report: Aeronautica Imperialis- In Search of the Ancestors

The Belt of Varin is a forbidding place in the Galactic Core.  There ancient stars fade and die circled by blasted rocks or frozen ice worlds.  It is a forbidding place filled with black holes, Nuetron Stars, Quasars, and Nova.  It is vast and desolate, with system upon system of blasted, unlivable rock where the Astronimicon is weak and navigation is difficult at best.  Few wish to dwell within it.
Despite its foreboding nature, the Belt of Varin was once the home of a thriving space empire, one that fell to treachery, oath breaking, and genetic corruption.  The people of Varin, Varingyr; have once again begun to emerge from their buried strongholds to venture and reclaim what was once theirs.

Tentatively, individual strongholds have begun to reach out to their fellow Varingyr across the Belt.
In addition to the natural dangers of the Belt; other inimical foes also lurk there.  The ancient enemy, the Orks; who have spread like a cancer across the old Strongholds.  Their spores finding root in the abandoned hab-domes and hydro-farms.  Human scavengers have also descended on the barren bones of the Varingyr’s once mighty empire under the banner of the Rogue Trader houses.  However, the most dangerous enemy of all is the Oathbreakers and Kinslayers; those who are no longer the people of Varin, but the descendants of the Great Patriarch.  As the true people of Varin return to their old homelands they have discovered them over-run by these scum and squatters.

It is just such a reclamation mission that brings Azuki Helmsward, Highguard of Irongard and her forces to a planet Designated: Tokokai 5.  Directed by her Thane and Kinsman Ako Helmsward; Thane of Irongard she has been sent to ascertain if the Tokokai Mineheads were still viable.  The Tokokai Clan had once been loyal vassals to the throne of Irongard.  Thane Helmsward hoped her people were still there, hidden in the mineheads deep below the planet’s surface.

However, as Azuki’s fleet approached the Highguard realized that the planet had been infested by the Flayer-Kin; orks.  That did not mean that the Tokokai Mines had been breached, but the barely livable surface was now crawling with the feral creatures.  Thankfully, the Orks of Tokokai 5 were relatively primitive and could not oppose her in space.  However, their ramshackle aircraft cruised the skies, their battlewagons rumbled across the surface, and their crude towns scarred the rocky landscape.

Azuki’s first instincts were to orbitally bombard the Orks savage settlements.  However, she was given pause.  It was unclear how much they had been built upon the foundations of the Tokokai Clans holdings.  She could not simply bombard them without risking angering the ancestors of her vassal clansman.  Such an act would be a great dishonor to the Oaths they had sworn millennia ago.  In addition, she was unsure if the Tokokai Clan still persisted beneath the surface, hidden away from the surface that was awash with Orks.  She needed to know more.

Azoki called her War Council, and the Highguard came to attend her and advise as was their duty.  In the great council, Azoki heard wisdom.  She accented to the wishes of the Engineer’s Guild and deployed recon patrols of Clanguard Spy Eagles to the surface of Tokokai 5 to gather intelligence on the fate of her Clans’ vassals. 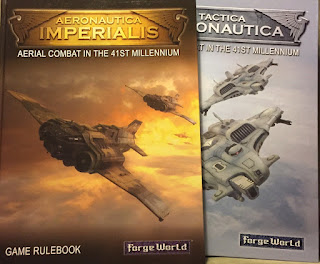 Mission:
This was going to be a Recon Sweep Scenario.  We rolled up 4 targets to be identified and scanned.  The Varingry were trying to identify the targets while the Orks attempted to drive them off.

This was going to be the first battle in the Ork vs. Varingyr tree campaign I outlined in a previous post.  I am hoping to get to use the fearsome Warlord airship at some point in the campaign, but I would also settle for a few good games.  Here is the Tree Campaign Outline.

Set-up:
We deployed several rocks across my brown wasteland looking table cover.  As usual, the rocks are 1 Altitude high per level.  I also placed an old Necromunda tower to act as ancient wreckage from the Tokokai Clan rule of the planet.  It is 6 Altitude high.  Therefore, if a plane comes in contact with these terrain features but isn’t high enough up they could crash with a failed Pilot Check.

We placed the 4 markers fairly evenly near the rocks in the center of the board.  These would be the objectives and some of them would be a tight fit to reach.

The Varingyr came in at low altitude and at max speed, which was a whopping five!  The two lead Iron Eagles were paired, and the third was partnered with the Spy Eagle.  The Orks were at mid-altitude and clustered to the south side of the board closer to the ruins.  They were all going about speed 5.

Movement:
The Iron Eagles race forward to meet the oncoming Ork craft and possible reveal some targets.  The Spy Eagle breaks-off and approaches the first marker.  The Orks also rush ahead, the bulk of them are going to skim the ruins, while Fighta 3 breaks out a bit wider to go around them.

Shooting:
No one was in range as they raced to meet each other.  However, the Spy Eagles sensors revealed that the closest objective was not a point of interest. 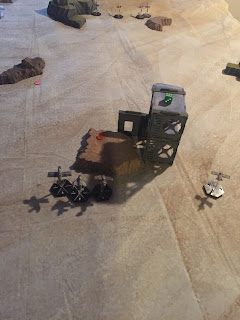 Move:
The lead Varingry force makes a high-G turn to run parallel to the oncoming Ork fightas.  Meanwhile, the Fighta-Bomma side slips to cover one of the markers, while the other two fightas move straight.  The last one heading out wide manages to turn casually towards the Varingyr fleet and may have some long range shots.

Shooting:
After checking, Ork Fighta 4 does not have the range yet. 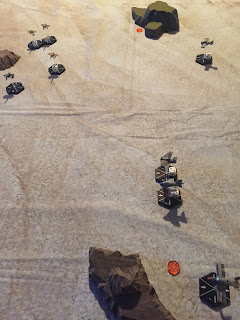 Movement:
The Lead Iron Eagle moves to view the next target area, but it is close to a high cliff and the angle will make it hard for him to avoid it next turn.  Meanwhile, the Fighta-bomba breaks back towards the action to chase down the low flying Varingyr aircraft.

The Spy Eagle follows the lead aircraft, ready to snap a photo if needed of the vital target.  Ork Fightas 2 and 3 turn into the action, while Varingyr 3 and 4 also turn in.  Both of these groups are still at higher altitude, and the Orks may have a shot at them as they close in.

Meanwhile, Ork Fighta 3 is heading straight for the Varingyr  However, he can not slow down fast enough and over shoots the enemy gyro-copters.

Shooting:
The Lead Iron Eagle’s gunner eyeballs the target area and realizes it is just a bunch of sand and rock.  There waa nothing of value there.  He quickly communicates it back to the Spy Eagle and prepares to eject if they can’t clear the cliff.

Fighta 2 opens fire on Iron Eagle 1 and causes him to blow smoke. 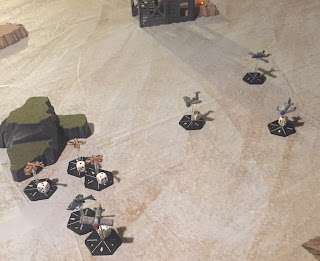 Movement:
The Spy Eagle skirts around the back of the cliff to avoid incoming Orks, but Fighta 2 is in hot pursuit, even if he is still too high.  Fighta-Bomma 1 is also closing in at the same low altitude 1.  Iron Eagle 1 and 2 disengage from the furball and begin to heads towards the next marker while all the orks appear to be focused on the Spy Eagle.

Embarrassingly, Iron Eagle 3 crashes into the cliff they just eye-balled.  Luckily, the crew managed to eject in time.   I can only lose 1 more aircraft. 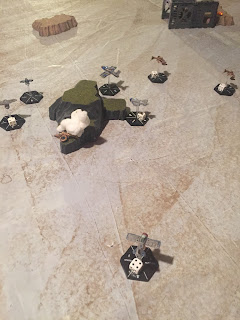 Movement:
Iron Eagle 1 and 2 race towards the next objective, and 1 tries to swoop low enough to get a good visual.  He is still a bit too high, as his wingman stays high to cover him from the incoming Fighta 4.  The Spy Eagle tries to break for the second objective at low altitude, but Ork aircraft are all over him.  Fighta 3 is behind, but too high.  The Fighta-Bomma foolishly swoops in front of him.  Fighta 2 makes a dangerous Power-dive and barely misses splattering himself on a cliff wall.

Shooting:
The Spy Eagles opens fire on the Foghta-Bomma with his Mag-cannons but misses.  He also fails to get a clean pict-cap of the swooping aircraft.  The Grot ball-gunner in the Fighta-bomma tries to turn and fire, but he does not have the angle. 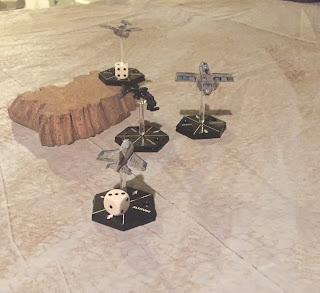 Movement:
Iron Eagle 1 can not drop and slow down enough and vastly overshoots the target area.  He is in danger of disengaging next turn.  Fighta 4 follows, and dives after, but will still have time to break off the attack.  Iron Eagle 2 tried to spiral back on the fighta, but underestimated the Ork pilots speed.

Meanwhile, the Spy Eagle is doing some fancy flying as he moves to shoot the altitude two gap int eh tall ruins.  It looks like he can make it without hitting anything.  Fighta 3 gapes in amazement, while Fighta 2 say “Hold my Fungus Brew and watch this!” as they give chase.  Fighta 2 overshoots and smashes into the gantries and explodes, however he ejected in time.  The Fighta-Bomma is sticking right with the Spy Eagle.

Shooting:
The Fighta-Bomma opens fire right on the Spy Eagles tail.  There is no room to maneuver and the gyro-copter is blasted apart.  The pilot has no room to eject and goes down with the craft. 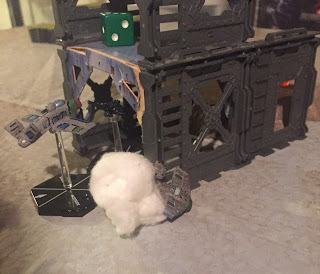 Movement:
Iron Eagle 1 hears the Spy Eagle go down, and decides to head home.  He bugs out off the board trailing smoke.  Fighta 4 follows, but breaks-off to head back to base.  Iron Eagle 2 goes the hard deck and heads away from  Ork territory.  Fighta 3 just flies straight to see if any of his Ork buddies make it through the gantry.  Fighta-Bomma one savors his kill for a milli-second as he smashes into the gantry along the side and shears his wing off.  His plane crashes spectacularly.  However, the Ork pilot manages to walk away from the crash with a huge grin. 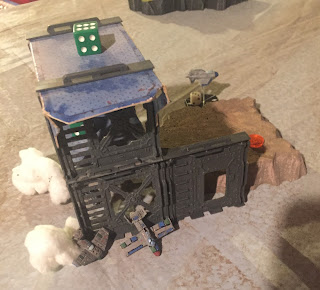 Conclusion:
The Recon missions on Tokokai proved to be costly for the Varingyr, with many of the recon craft not returning.  Their mission to locate entrances or mineheads of their fellow Varingyr was a failure.  Worse, the Orks now knew of their presence, and it would make it harder to surprise them.  The only way forward would be to land troops on the surface and establish forward operating bases to scout the area.  That was a dangerous escalation for a planet that may not even be salvageable.  The Highguard turned to her War Council and they began to prepare for the landings.

The Varingyr failed to observe all of their objectives, but the cost in aircraft was about even.  Two lost a piece.  When I went to move the Spy Eagle through the ruins I was sure I had lined it up perfectly.  I didn’t expect the Orks to try and chase me.  Instead, it turned into something out of a movie as they did not give up.  All in all, some crap flying all around as we both crashed or almost crashed into terrain during this battle.  I guess my regular opponent and I need to knock the Aeronautica Imperialis rust off since we haven’t played in a while.

If you look at our Campaign Map, you can see the Varingyr lost the first battle.  That means…. 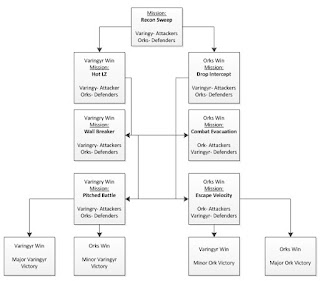 …. We are onto the Drop Intercept mission.  Maybe I should bust out my Warlord for this one?
Posted by Blood and Spectacles Publishing at 7:46 AM