In 1862, the state of Kenteddy had declared themselves neutral, but Tederalist and Contederates had both moved into the region.  Contederate sympathizers established an alternate capital at the city of Bowling Green.  However, their numbers were inferior to that of the Tederalists in the region.

Luckily for the Contederates, the command in the west was fragmented between several competing commanders for the Tederalists.  This led to confusion and an inability to unify their efforts.  Tederalist Brig. Gen James Bear Garfield  attempted moved to drive Contederate Brig General Humphrey Bearshall from the area as they had been using it to recruit new bears to their cause.

After maneuvering, the two, roughly equal forces met not far from the fork in Miller’s Creek.  They fought over a small field and swampy region between the woods and rocky ridge line that was the border of the creek.  This battle would help decide who would control Kenteddy.

I purposely chose identical armies for this battle so that I can test out the rules fully and highlight how they work.  I am interested to see what I find out.

Set-up
The board is 6 x4.  It is flanked by difficult terrain with woods on the west side and rocky ridges on the east.  On the north side is a couple of small fields that the Tederalists are deployed in.  The field will be difficult terrain, but also offer some light cover.  A small pond and swamp are off-center.  On the South side, the Contederates are deployed in the open.

The Contederates deploy with the cavalry on the left, then two regiments of Infantry in line, their cannons, the General, and a column of infantry in the ridgeline. 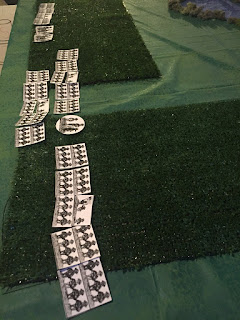 The Tederalists have two lines of infantry backed up by the third line with cannons on the left of them.  On the far left behind the pond is the cavalry. 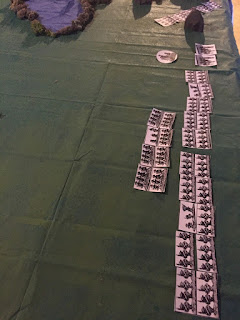 Mission
This will be a straight forward battle where each side is trying to run the other side off the field and out of the state of Kenteddy.  No fancy mission objectives here just knock the stuffing out of the other side.

Turn 1:
The two sides close in on each other, they are still too far away to fire, but anticipation is in the air. 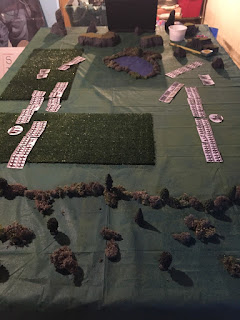 Turn 2:
The Blue Jacket cannons ring out and the balls find their mark in the advancing Grey cavalry.  This is followed by Union infantry firing into the Contederate hobby horsemen, and a charge by Union Teddy’s own cavalry.  The Contederates are sent reeling backwards with 4 hits and panicked!

The Contederate infantry advances and manages to injure some of the opposing infantry in a brisk exchange of musket fire.  On the Western flank, musket fire through the crops does not go the Contederates way. 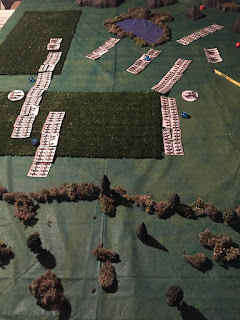 Turn 3:
Tederalist troops move up and pour fire into the 1st Contederate infantry regiment.  The Contederates respond with a charge, but are sent reeling back in a panic.  The two cavalry units clash again, and the Contederates are forced back reeling.

The third Tederalist troops form column and charge into the second Contederate infantry.  However, these Contederates are made of sterner stuff and force them back panicked.  The Contederates must have a spine of steel as they counter-charge and smash back the Tederalist cavalry and beat the remnants of the Tederalist infantry again, forcing them back in a further panic!

This gives general Bearshall some breathing room and he is able to call in his reserve infantry units.  They dash forward in column and then change to line to back up the 2nd Contederate infantry regiment.  He also manages to rally his panicked cavalry.

Tederalist General Garfield is not as lucky and fails to rally any of his panicked units.  This could be the decisive moment of the battle! 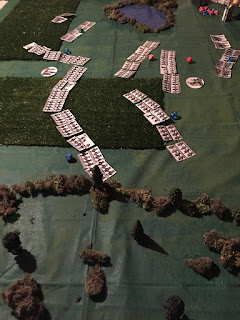 Turn 4:
Contederate cannons find the Tederalist cavalry with a barrage, but fail to break them.  The fierce Contederate 2nd infantry switches into an assault column and charges into the Tederalist 2nd Infantry in line, who has been untouched by fire.  However, the thin blue line holds and pushes back the Contederates in a panic!

The 1st Tederalist infantry unit tries to Volley fire, but is too unorganized.  However, their shooting is still effective, and the 1st Contederates are near the breaking point!  Sensing that the 1st is about to scatter, General Bearshall shuffles his 3rd infantry into place to back them up.  This re-shuffling was just in time as the 2nd Tederalist’s fire breaks the 1st Contederate infantry and they scatter and rout to the rear!  They are first unit broken in the game.  General Bearshall rallies the pancked Cavalry and orders them to fill the game in his line by the pond.  Ineffectual fire from the rallied unit fails to tell on the 3rd Tederalist forces.

General Garfield fails to rally the panicked 3rd infantry and they stay in their panicked columns.  The Tederalist cavalry charges home on the Contederate brothers.  However, they are again repulsed and sent panicking backward.  The third infantry manages to pull themselves together enough to change formation and set-up to backstop the Union lines.  With the flight of the Tederalist cavalry, the artillery fires at the Grey cavalry but fails to cause significant injury.

Things look bad for the Contederates. 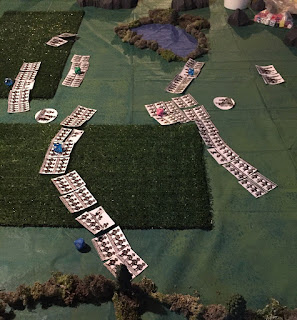 Turn 5
General Bearshall rallies the 3rd Infantry of the Contederates and they shake out of column and into a firing line.  The 1st and 2nd Tederalist infantry fire on the reformed Contederates with volley fire, but failed to do more than scratch them! 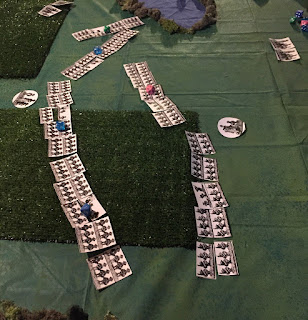 Gen. Garfield managed to rally the panicked cavalry, who rushed forward and opened fire on the last Contederate unit.  However, their fire was mostly ineffective. 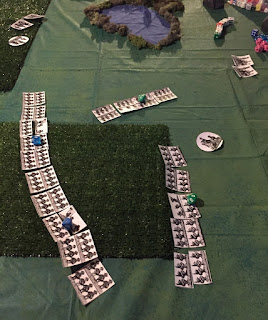 Conclusion
Gen. Bearshall surveyed the field and decided discretion was the better part of valor.  He ordered a withdrawal, and his last remaining units retired under artillery fire.  His troops withdrew to Teddessee and left Kenteddy to the Tederalists.  The secessionist legislature fled, following after Gen, Bearshall and his troops.

Gen. Garfield was unable to follow-up and pursue as he became caught up in the bearocracy of the Tederalist War Department.  The chain of command was unclear.  Despite freeing Kenteddy from Contederate forces, further follow-up would not come to later. 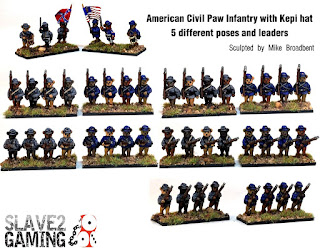 Final Thoughts
Interestingly enough, shooting was much more effective in this game that a first read through would indicate.  The long charge range seems to indicate that charging is a preferred attack.  However, I had almost zero positive results from charging.  Assault columns were rebuffed by line formations, cavalry was repulsed by infantry, and even a flank charge failed!  My reading of the ACW would seem to indicate that this is accurate to the warfare of the time and that charging was a last desperate strategy.  However, I was really disappointed by the result of the flank cavalry charge.
We were also late to learning the amazing firepower of artillery in this game.  I should have been using it more effectively, but my own troops often screened their firepower.  It will take careful planning to make the best use of it next time.

On game mechanics I think some work still needs to be done on flanking, LOS, and partial LOS/cover firing.  I enjoyed the initiative system immensely but once a unit was destroyed mid-turn there needs to be a way to remove a counter.  I am unsure how that would work.  However, it was a quick game and ran smoothly. 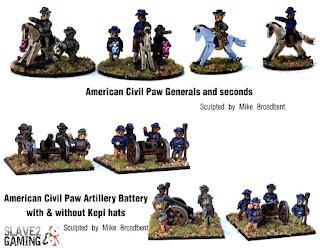 Posted by Blood and Spectacles Publishing at 4:17 AM