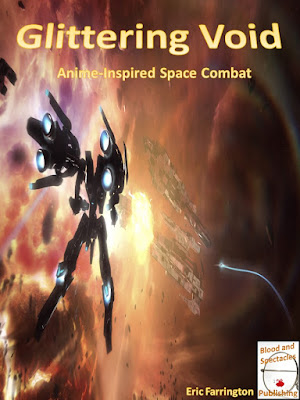 When I originally designed this game, I intended to use Dream Pod 9's "With the Lightnings" Range of figures for my space mecha combat fix!  I still do, and the rules even trying to call out some of the sculpts that go with some of the mecha profile.  However, the game is pretty much scale and model agnostic so you could use anything you wanted!  You could even use Gunpla kits if you wanted to!

I initially used some of my infamous paper templates to do some playing and testing with the rules. 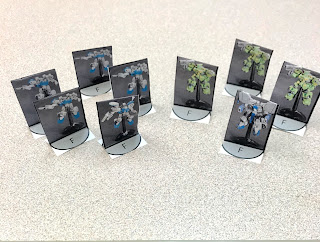 However, one day I ran across a bulk set of ugly toy Gundam knock-offs with 144 for about $14 US.  I swooped in and picked them up for use in this game.  Make no mistake, these are some seriously ugly, plastic toys, but at about 10 cents a pop, it did not seem like I could go wrong.  Plus, they are cheap enough to cut up and re-assemble with no fear.  I may also give some of them a lick of paint to see what happens, but not this day.  I could try to pick up some of those Lego weapons to go with them for Beam Cannons and Mas Rifles and the like too.  Perhaps I will see how converting these ugly little dudes goes before I try any of that. 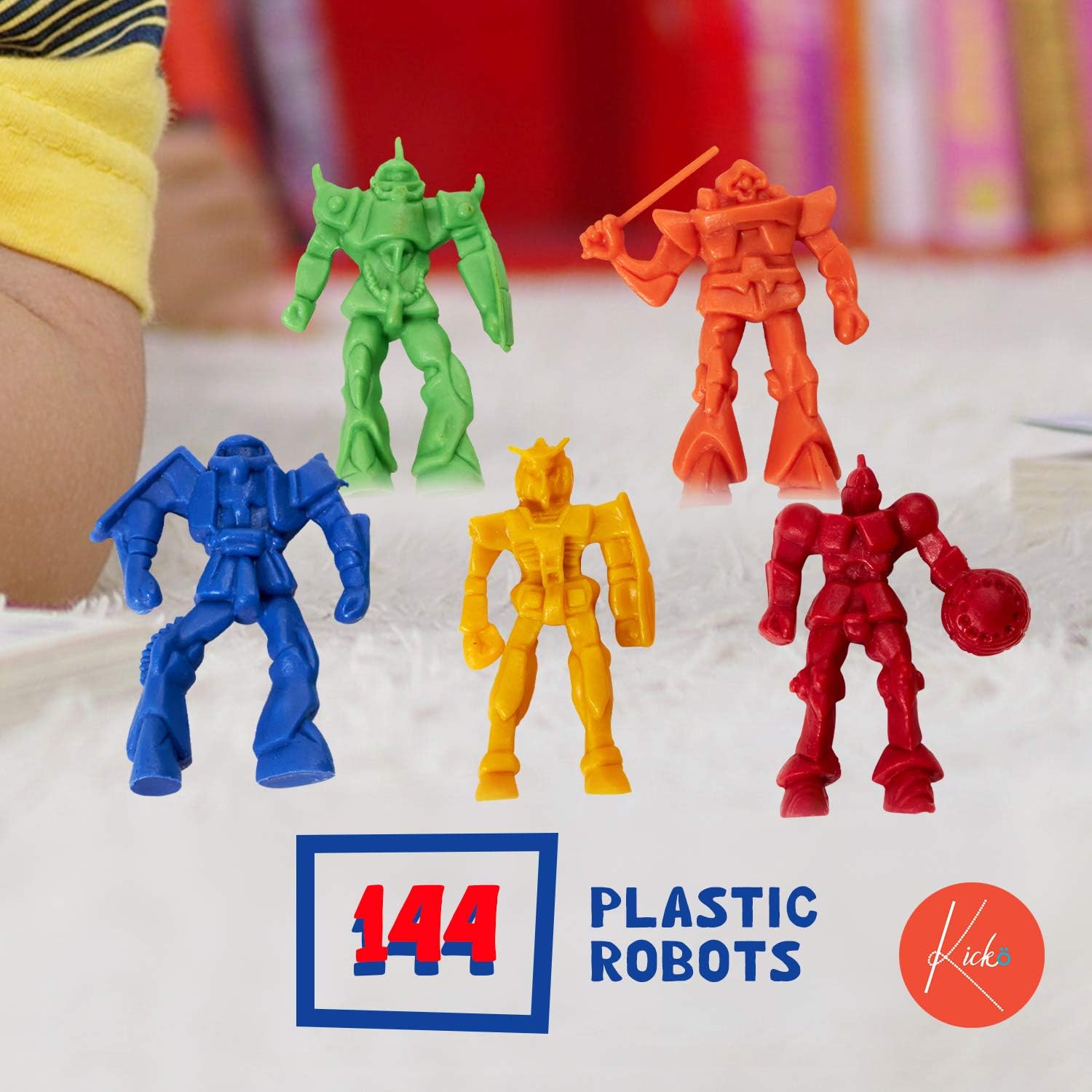 Armed with my new, plastic Kicko robots I decided I had to get them out on the table for another battle using the Glittering Void rules.  If you go to the desktop version of the blog, you can see a Work-In-Progress section of the blog.  This section has links to games that are playable, but still in the development process.  You can find Glittering Void there.

The trading contract for the Freehold of New Arcadia will expire and come up for re-negotiation in the next rotations.  Traditionally, these contracts have been held by corporate interests aligned with the New Olympians, and New Arcadia was considered within the New Olympians sphere of interests.  However, the free hold is located in the Asteroid Belt, which the Earth Alliance views at its territory.

With the contract set to expire, elements of the Earth Alliance have begun aggressively courting New Arcadia.  They have offered lucrative incentives, and coupled them with veiled threats.  In fact, some smaller trading and prospecting vessels from New Arcadia have gone missing in the region.  The Earth Alliance has cited this as a prime reason to change contracts, as the New Olympians have failed to properly protect and enforce the expiring contract.

The powers that be on NeOlympus have deemed it necessary to reinforce their alliance on New Arcadia.  To this end, they have deployed a patrol ship and a compliment of suits to New Arcadia space.  A Carrier arrived and dropped off just such a ship before continuing on its route.  The New Olympian commander on the scene has pledged to find the cause of the missing prospecting vessels.

Investigating the last know location of one of these New Arcadian Prospecting ships, the New Olympians had unusual activity on their scopes.  Interference was being thrown out by a large Radiation Band in the area.  Therefore, a patrol of Suits was deployed to investigate further.  This led to an engagement in the Radiation Band between unknown Suits and the New Olympian pilots.

Post-battle analysis allowed the New Olympians to identify that the suits engaged were of Earth Alliance design.  However, the Earth Alliance is well known for selling their tech to anyone with the currency to buy it.  Identifying their suits would not be enough to link them to the loss of the Prospecting Ships from New Arcadia.

Therefore, the Patrol Craft tracked their potential telemetry to a nearby Asteroid that could house a forward operating base.  En route, unknown suits were identified attempting to transit from the area.  The New Olympian pilots were scrambled to engage the fleeing Suits and attempt to disable and capture the Polemarch suit.  Hopefully, the "Officers" suit would allow the New Olympians to gather needed intel on these freebooters and discover their connection to the missing Prospecting Ships. 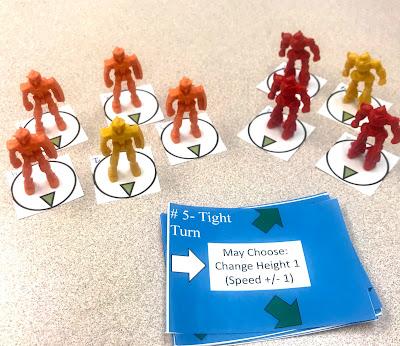 I use dice to raise or lower their altitude.  On the table is Alpha, 1 dice is Beta, and 2 dice is Gamma level.

I also made some small paper circles for future games that will be used to show the direction travelled.  A key part of this game is that you can travel one direction, but face another.  Facing is based on the Front (marked with an F on my templates but normally the actual faces of the model) and the direction of travel will be based on the triangle on the marker below the template.  Eventually, I will have bases with direction arrows on them, while the miniature will be able to swivel.  Make sense?

Today's mission is found in the main rulebook.  This scenario is a targeted attack.  The New Olympians are trying to disable/knock-out the Polemarch suit, while the Freebooters are attempting to take out the Ares with the dual Beam cannons.  These suits offer an additional +15 VP for taking them out.

Today's game will be on a 48 MU x 48 MU board with 1 MU being one inch.  This area of space has two large radiation fields that the Freebooters are trying to use to cover their escape.  They are marked by Pipe Cleaners.  These fields cover Alpha, Beta, and Gamma heights.  They are obscuring and dangerous.

The Freebooters are set-up in the corner around their edge of the board.  The Polemach is in the back at Beta level.  The other Hoplon suits are forward of his at various altitudes.  One looks like they are planning on going around the Rad Zones for a flank attack.  Meanwhile, the New Olympians are on the center of the opposite board edge.  The squadron is anchored on the right by the Dual Beam Cannon suit.  The others string across at various heights.  The New Olympians appear to be going between the Rad Zones to start. 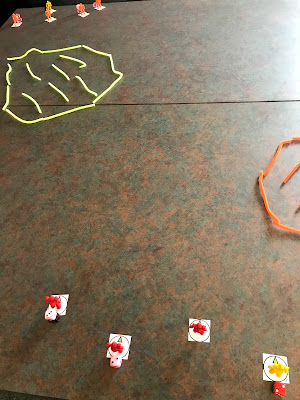 The Freebooters go first as they have more Suits on the board.

The two sides race towards each other eagerly without holding back.  They look to be going head-to-head.  In that case, the Freebooters look like they have brought more guns to the party!

Everyone is just out of range.

The Freebooters have more models and go first.

The Polemarch moves to try and lure some of the New Olympians away, but he largely fails as they turn sharply into the Rad Cloud for cover.  However, the main target with the Dual Beam Cannons lags behind and is in the open.  Hoplite 5 and 4 close in while the others try to target the Ares suits in the Rad cloud.

Whoops, upon a review of the rules for Rad Fields it turns out they are Dangerous terrain.  That means the Ares suits that flew in there need to make Damage checks! two of them fail!  Thankfully they do not suffer from any special damage. 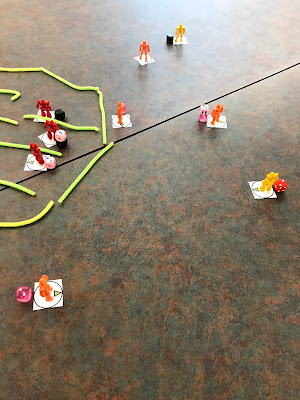 The Dual Beam Ares sees Hoplite #5 closing in up high.  His targeting computer lights him up and he fires, taking the suit a blast of high-powered energy!  Scratch one Freebooter!  The Dual Beams had a forward and Up fire arc, so he could target the higher suit. 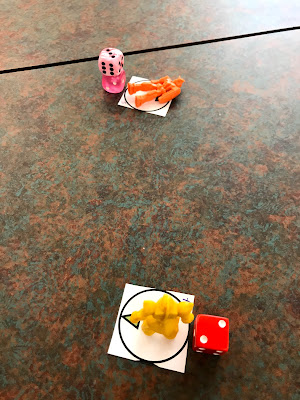 Hoplite #4 lowers his Rocket tube and prepares to fire on the Dual Beam Ares.  The pilot makes a Burst Fire check and passes! His shot is clean, and the Dual Beam Ares is blown to smithereens by a hail of Rocket fire!  Boom!  Objective complete for the Freebooters.

Of course, that is not the end of the shooting war.  Ares #1 fires out of the Rad Field and manages to blast Hoplite #3 into small pieces with a Beam Rifle shot!  The Polemach returns fire but does not have the range.

Hoplite #2 fires into the Rad Fields, and manages to finish off the damaged Ares #3! The pilot fails to eject and is riddled with slugs. 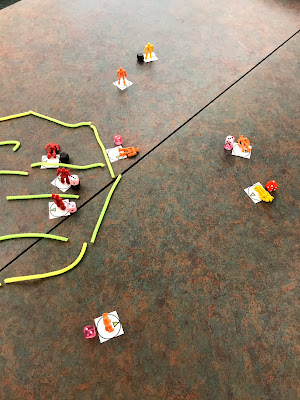 The Freebooters still have the advantage.  They go first again.

Realizing their mistake, the remaining Ares suits scatter to get away from the Rad Field.  It damaged their electronic systems and failed to give them adequate cover.  The Polemarch breaks off and goes high, while his remaining Hoplite suits pair up to support each other. 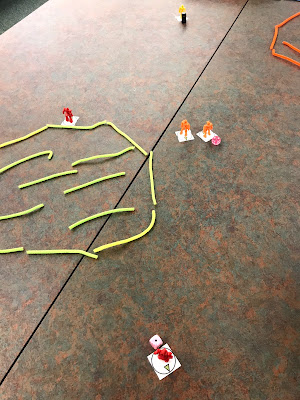 The Freebooters have no range or angle this turn.

Ares Suit #2 has a shot with his Beam Rifle at Hoplite #2 through the edge of the Rad Field.  The pilot makes a Rapid Fire test and passes.  He Opens up a barrage of Beams from his outstretched gun hand and riddles the Freebooter suit with fire.  The Pilot manages to eject safely from his disabled mech, and his picked up by Hoplite Suit #4.  However, his suit is destroyed. 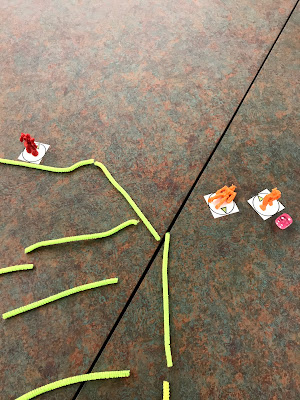 With that, both sides withdraw to lick their wounds.  It was a short, brisk engagement that left both sides bloody.  However, the Freebooters managed to eliminate the heavy firepower of the Dual Beam Ares suit, and the New Olympians failed to catch the Polemarch.

The two remaining Ares Suits docked back with their patrol ship.  The new, empty maintenance hangars sat open and dark.  A shadow descended over the pilots and crew.  They had come to New Arcadia filled with confidence in their skills and their machines.  Now, that confidence was being tested by a band of Freebooter scum.

The enemy suits had managed to slip the Patrol Crafts scopes in the Radiation Fields.  The trail of the missing prospecting ship had gone cold.  With that, the New Olympian Patrol Craft made way for a nearby way point, and prepared to make a jump to the closest neutral Freehold, Liberty Pointe.

Liberty Pointe was not aligned with the New Olympians or Earth Alliance.  The freeholders of Liberty Pointe were aligned with the Outsider Confed.  However, they welcomed ships from all parties to help bolster their trade.  They were a well known den of thieves, cut-throats, mercenaries, and black marketeers.  If the Freebooters were going to try and fence anything from their attacks on New Arcadia; Liberty Pointe would be their logical destination.

As the New Olympians, that did not go well...... at all.  Of course, the obvious mistake was breaking into the Rad Field.  I wanted to use it for cover.  It was only after doing it that we decided to look at the rules for them again.  Woops!  Not only are they obscuring, but they were also Dangerous!  That cut my forces Hull down by 2 without my enemy even firing a shot!

I also criminally mis-used my Dual Beam Ares.  I wanted him to slide sideways and provide covering fire for my advancing Suits.  That part worked, but then I left him exposed when he could not keep up with his fellows due to his flight angle compared to his compatriots!  Bad wingman..... Bad!

On playing again, I think I need to go back and review how damage/critical damage works.  With this "line" Mecha they will rarely get any Critical Damage.  They tend to explode too fast!  Maybe this is fine, leaving Critical Damage for more "Heroic" mechs?  I will want to review and run some more playtests and simulations before I decide.

Lastly, I liked the models fine.  I do want to chop them up, repose them a bit, and paint them.  I also feel like I need to scour the bitz box and find some weapons or other gear to kit them out with.  I have some other projects to finish up first, but this will be a fun side project.

Posted by Blood and Spectacles Publishing at 2:05 AM