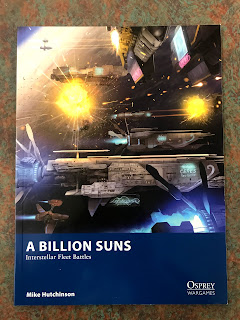 This game took a while for me to get.  I actually ordered it about the day it came out.  However, it got hung-up in Brexit and took a couple months to get to me.  By the time I had gotten it, all the hype had died away.  Even for me!  Chances are, if you are interested in this game, you have all ready read plenty of reviews, watched battle reports for this game, painted your own fleets, and even played it by now.  I am sure you all ready have an opinion on it, may even have a copy in your library of games, or even played a campaign of it.  Oh well, better late than never!

A Billion Suns is a game of Corporate shenanigans.... IN SPACE!  Unlike most spaceship games, you are not an admiral in control of a fleet.  You are a space Consultant.  You get contracts that equal money.  One of the big challenges in this game is making sure you use the right tools for the job and do not break the bank.  You need to operate in the Black.  This is a big change to the usual genre conventions.

Mike Hutchinson is also the author of Gaslands.  That was a big hit for the Osprey Wargaming Series.  I am sure they are hoping he has put lightning in a bottle a second time.  After all, Gaslands ended up getting re-booted and expanded into a hard back book.

Let's go into the interstellar board room and see what the R&D coats think of this.....

Things That I Liked

Right off the bat on page 9, you can start to realize that this is not any ordinary fleet game.  It encourages you to play across more than one "table" or flat area.  Each contract/mission uses a different number but the key thing is that the game uses more than one at a time.  Therefore, what happens on one table impacts what is happening on another table.

The game is model and scale agnostic.  This is always a plus for me in any game, but I can see that the potential investment in ships could be high.  You may need to bring a battle group of 5 battleships in one game, and never use them in others.  Therefore, you will need a diverse collection.  However, the game would be full playable with paper cut-outs, proxies, or other things besides miniatures.  I do love me some paper templates!

The game uses simple mechanics so that big ships can be hit easier, but can shrug more damage than other ships.   The "Silhouette" mechanic is very elegant.

The actual managing and moving your fleet is pretty conventional.  You use the center of mass for measurements, and closest ship to closest ship in your battlegroups.  All very sensible for a scale agnostic game.  Plus, you do not need any turning templates!  The orders and mechanics are pretty straight forward for combat as well with nothing that really stands out.  The coolest thing is the ability to move between tables using Jump Points, and how bigger ships can damage smaller ships when jumping.  It is like a hi-tech ram.  The mechanics for smaller ships sheltering under bigger ships is nifty as well.

I think we all know that this game has no pre-made list building.  You choose and deploy forces based on the needs of the table.  Deploying forces costs credits, and securing objectives earns credits.  Credits form a simple way to track who is winning and losing.  The Victory conditions and Contracts then naturally put limits on what you use in the game.  Sure, you can deploy 5 battleships in a battlegroup for 25 credits but if you only earn back 2 credits from the contracts on the table, you will lose no matter how many enemy ships you scrap.  Pretty elegant design for what the game was trying to do. 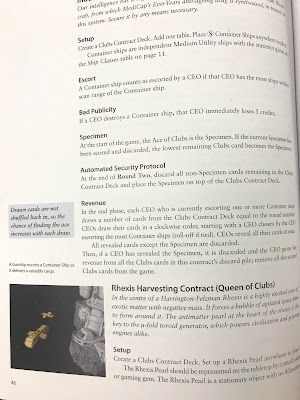 The game uses a roll-under mechanic, so low numbers are good.  This is a personal preference, but I have a really hard time with roll-under systems.  I have been so conditioned that high numbers = good that I have a hard time breaking that thought process.  The method in the book makes it a lot simpler and easier mechanically than using a chart or a subtraction method..... but I still do not like roll under systems.  Huge personal preference there.

The heart of the game is resource management.  You have to manage jump points, control helms, battle groups, contracts, profit vs loss, giving orders, etc.  The game is focused on doing more with less.  This is a great concept that leads to good decision making, so why am I putting this in the Do Not Like section of the rules?  This blog espouses decision-making for good gameplay?

Yes, this is true.  However, this level of decision making crosses a line for the games I like to play.  The resource management here gets into micro-management levels.  The game honestly feels more like a board game, or a "Dudes on a Board" style game than a wargame.  "Dudes on a Board" is basically a board game with miniatures, and that is the vibe I get from this.  There are a lot of great mechanics, but the feel is all wrong to me.  The focus is not on the tactical action, but on the strategic action; but there is a blur since the strategic choices are an integral part of the game in action.  Again, this is a strong personal opinion and you may feel differently, but ultimately the focus here is doing more with less; and I want something a bit more "conventional" in my space navy games. 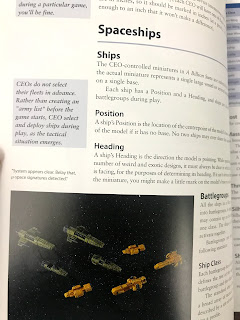 This game is designed for multi-player from the outset, 2-4 players.  However, it is not explicitly designed for Solo or Co-op play.

The game allows pre-measuring.  This makes sense for a sci-fi setting.  Sensors sense stuff like distance after all.  That said, the game is scale and model agnostic but the standard measurement is the inch.

I thought the book had some great images of space ships and space terrain BUT there was so much content that the photos ended up being relatively small.  Instead, they had full page photos of spaceships with no context or background.  The spaceships were nice enough, but really looked out of place and one-off.  I would have preferred if the photos were larger and the art smaller.  I know, a small nit pick.

The end of the book has rules for creating you own custom corporations for your games.  This allows you to tailor your choices to preference and give each faction some uniqueness.  I am always a fan of this type of customization.  In addition, there are rules for running campaigns in addition to one-off games.

In addition, I am way behind the curve on this book.  I am pretty sure new contracts, solo-rules and other  rules have been released.  I have not tried them, but they are out there.  This might be in a Blaster issue on the Wargame Vault, or elsewhere on the web.  Sadly, I am really not 100% sure. 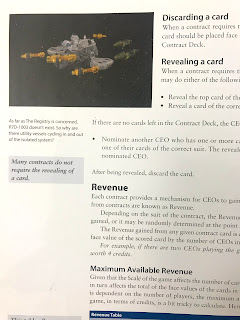 So yeah, there you go.  When I first heard that Osprey was coming out with a space combat game, I was pretty excited.  Then, I heard it was from Mike and I was doubly excited!  There is a lot of interesting and novel stuff here.  The idea of playing on more than one board, the lack of fleet lists, the victory settings are all very cool ideas.  Plus, no templates for movement!

However, in this case I feel like this did not deliver the experience I wanted at all.  This is a case of "Innovation being over-rated".  These ideas and concepts are great, but ultimately it is NOT the space combat game I was hoping for.  I wanted something a bit more..... conventional?  I know, I know; what a curmudgeon!  I think the release of the Military Contracts will help but it might be too little too late.

So overall, a pretty cool game with a big "BUT" attached to it.