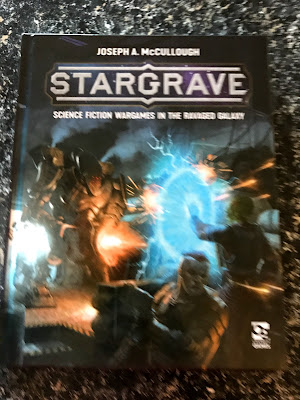 I got my copy of Stargrave in the mailbox the other day.  It took a bit longer as I insist on getting hard copy books rather than PDFs.  Why?  I do not know?  It is a personal preference.  However, sometimes that slows down my reviews as I wait for a dead plant version to show up at my location.

Anyway, this game is the highly anticipated Science Fiction skirmish game by the prolific wargame designer Joseph McCullough.  Many people have been looking for the "Next big thing" in sci-fi skirmish gaming and the buzz was that this was it!  Obviously, it is a variation of the popular Frostgrave line, only this time set... IN..... SPACE!

The game is set in the Ravaged Galaxy.  The great galactic civilizations have been brought low after the carnage of the Last War.  Where once civilization flourished, now it was nothing but decay and ruin.  Planets were left to fend for themselves, as were the people on them.  To make matters worse, after the Last War; pirate fleets sprung up to replace the nation-states.  These pirate fleets roam the Ravaged Galaxy smashing anything that could be a threat to them and looting, pillaging, and destroying as they go.  Now, the Galaxy is more like a huge version of Tortuga from the Pirates of the Caribbean movies.

You represent a small starship and their crew trying to make their way in this tough galaxy.  You can put any backstory you want to it, but you are essentially Mal and the crew from Firefly/Serenity.  The crew is trying to get by and keep on flying.  This is accomplished by hiring yourself out for various small time jobs like smuggling, raiding, trading, etc.  You know, the dirty work.  By staying small time and in the shadows, they avoid the Pirate Fleets.

Honestly, I do not know how much I will really have to say in this review that you can not understand from my Frostgrave and Ghost Archipelago reviews.  These are practically the same game systems with only a few minor variations.  However, there is some genre gloss to bring it into the new setting.  Therefore, I think this review will be a bit different than some of my others as I focus on what makes this game different from the others. 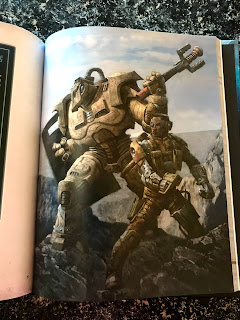 The game focuses around the Captain and First Mate of the Starship.  There are several backgrounds which give you access to various abilities that are similar in nature to Spells or Heritor abilities from those other 'Grave games.  Unlike the Fantasy version, your Captain and First Mate are distinctive characters with their own backgrounds and abilities.  From what I can tell, the powers appear to be distinctive with only some overlap with Frostgrave and Ghost Archipelago, which is a good thing.

One of the best parts of Ghost Archipelago is that it always allowed for 10 crew men in your group.  Some you could upgrade for a cost, but you always had access to 10.  Stargrave incorporates this into the crew creation process here as well.

The game also continues with the improved Loot placement from Frostgrave 2.0 and Ghost Archipelago.  However, there is a twist.   In addition to just one type of loot, there are two.  One is physical loot sealed in storage, and the other is digital loot.  Before you can run off with the Loot, you need to crack it open first.  This is a basic test, but it is not easy to do.  Some specialist models help with this process.  This means it is harder to just scamper up and grab loot and book it.  Plus, you need to put the right model for the task to increase your chance of cracking the loot open.

Finally, of course the game has a lot more "pew-pew" in it than the others.  There the focus was magic and hitting people with sticks real hard.  This time, you can shoot them with "pew-pew" from much farther away.  Everyone has a gun.  In addition, folks who take 4 or more points of damage from a shooting attack can be stunned, which is like getting pinned or going prone. 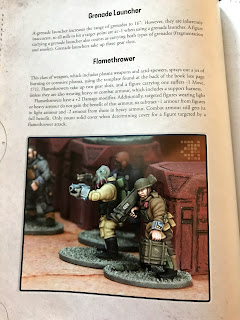 The elephant in the room is that this is essentially the same game.... again with a genre veneer placed over it.  The key mechanics are essentially the same, so the criticisms I have of the system itself about being swingy, individual modifiers are almost meaningless, and the game will get stale without new scenarios all the time still apply.  There is actually very little tactical depth in this game because miniatures see 360, can face anyway they wish, and everyone gets two actions.  If you have played any of the authors other games, you will know exactly what this game is like.  To some, that is a benefit.  To me it was disappointment.  I was prepared for it, but it was a disappointment none-the-less.

The Ravaged Stars are so under-developed that there is no "There, there"  By that I mean that the setting has no sense of place beyond generic sci-fi setting #263.  In Frostgrave, you get a strong sense of place based on the little fluff blurbs from and "In-Universe" perspective.  This book desperately needs that!  The bits of fluff on the Last War and Pirate Fleets is not nearly enough as they probably total about 2 pages of text scattered through out the book.

This game has no real hook to it other than, "Hey you liked Frostgrave right?  imagine if it was .... IN.... SPACE!  Cool huh!"  As a result, it feels a bit weak sauce and lazy.  I know Joseph McCullough can do so much better than this!  Ghost Archipelago was basically a knock-off Frostgrave too, BUT it still had a strong connection to place, setting, and mechanics that built onto that hook.  I do not feel the same level of thought was put into the Ravaged Stars in an attempt to be all things to all people.

Finally, I am not convinced using escalating random encounters with Pirates is a good way to force "end game" situations.  As I saw it in action, it did create friction for the players, but at the same time it felt like it robbed them of the rewards of some of their earlier game decision making.  I think a "Doom Clock" mechanic like The Walking Dead or Gamma Wolves would have been a better choice.  That way player choices would have impacted the end game scenario further than the escalating encounters with pirates. 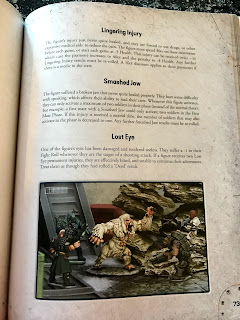 Most of the mechanics such as activation, wounding, using a power, etc. follows the familiar processes laid out in the other 'Grave series of games.  If you are familiar with those, you will be familiar with these.  You will be able to pick-up and play pretty fast.

The focus of these rules is linking games together into a Campaign.  Therefore, it has all the elements of a campaign game such as injuries, acquiring experience, getting gear, upgrading your ship, etc.  However, the focus of the upgrades is really your Captain and First Mate.  Most soldiers are expendable meat.  The author even makes a crack about not bothering to give them names.   I should paint them all in Red Shirts.

The game also has 6 scenarios in the book.  Scenario writing is one of the areas I think Mr. McCullough is better at than most.  He typically takes a basic wargame scenario and adds a unique spin or set of frictions within it.  These are no exceptions, and the friction typically takes the form of various random encounters with Non-Player Creatures (NPC?  That doesn't seem right?), some target number you need to roll for, or some other wackiness.  That means the game has a pretty decent sized bestiary and foe list for scenarios and for the Random Encounters/Unwanted Attention.  Of course, you could also just have the basic game of "Place loot, get loot!" style of game too.

There is a list of generic weapons.  Surprisingly, there is not many support or heavy weapon options.  The only I recall seeing were Grenade Launchers, Repeaters, and Flame Throwers.  Mostly just light weapons like pistols, carbines, shotguns, etc.  There is a "power armor" equivalent, but unlike most equipment you need to pay a cost every game you use it in.  The specialists are also few in number to start with.  However, there are all ready 2 expansions slated to be released so I am sure equipment, specialists, and weapons will get kicked up a notch.

The book does not have solo/co-op rules built in.  However, there is a packet of solo rules available online. 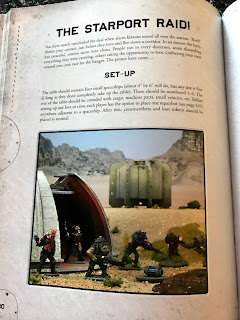 The game has a line of plastic, multi-kit figures from Northstar Miniatures.  You do not need these minis to play.  Amusingly, they also did the miniatures for Rogue Stars, a previous Osprey sci-fi game in their Wargaming Series.  Many of these miniatures make an appearance in this book too.  In fact, I believe that the Rogue Stars miniatures have been re-branded as Stargrave models now.

I was expecting a generic setting that was model and scale agnostic, and that is what we got.  I was also expecting Frostgrave in Space, and that is also what we got.  Therefore, everything I said about Frostgrave and Ghost Archipelago applies to Stargrave too.  That was a bit of a disappointment to me.  The adjustments to Captains and First Mates was simply not enough of a hook for me.

Ultimately, I got exactly what I expect from this game.  That made me sad.  I was hoping for more.  The Ravaged Galaxy is really in desperate need of a bit of fleshing out to make it seem alive.  I know the maker wanted me to be able to bring my 40K minis, my Infinity minis, my Star Wars Legion minis, and more to the party..... but right now it is far TOO generic to give me anything to sink my teeth into.  There are literally hundreds of games that do this all ready on the Wargame Vault all ready.  The entire pitch for this game feels tired, just a guy excitedly shouting, "You liked Frostgrave right?  Then you will like this!"

As a result, the game feels a bit "perfunctory" and "by the Joseph A. McCullough numbers".  I honestly do not blame him for it.  If the formula works, use it!  However, this makes me re-double my hopes that the Silver Bayonet changes up the author's usual formula considerably.

All that being said, I am sure it will be great fun!  This is a game that demands to be played in a campaign with 4+ players!  That way, each group can build their own backstories, characters, and backstab other players wily-nily.  This game creates a great space for this in your wargame club. 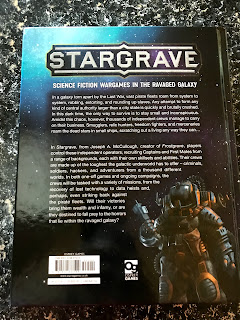 Posted by Blood and Spectacles Publishing at 3:23 AM