The Shallows had been his home as long as he could remember. He had scrapped by on his father's boat collecting scrap and hauling in to be sold at auction on Grig's Island. Eventually, his father had passed, and the boat had been handed over to him. The loyal crew, and at least some of them; stayed on too. From that day on, he had become Captain Jacq.

Since then, he had been lucky, brutal,and cunning enough to survive in the Shallows. His crew had earned enough scrap to upgrade to a bigger boat and a bigger crew. However, there had been a cost. Debts that needed to be repaid, and in addition to hauling scrap Captain jack had taken on a bit of piracy and smuggling as a side job. It wasn't long before he had become embroiled with Hanzo and the Syndicate. That was a dirty business and one Jacq did not relish.

However, Operation: Hemlock gave him a chance to earn enough scrap to get a big enough stash to head out to sea for real and leave the Deff islands and the Syndicate behind. All he had to do was survive, and that is something that Captain Jacq had been doing for a long time.

“Captain, the scout is signalling!” the man..... boy really.... in the crow's nest shouted down to him. The blue sky was clear, and Captain Jacq was pretty sure the look-out could see half across the shallows from his perch.

Captain Jacq cupped his hands, “What is it lad?”

“Bad news. Smoke sign from the coast. The Orks comin' out! To cross the Shallows!” the boy started hopping in excitement and nerves.

Captain Jacq cursed and made the sign of the aquilla. The Syndicate had given him a few boats and Hanzo himself told him to keep the Orks from making it to Baron's Island. He expected a milk run while the Navy boys did all the dying. He hadn't expected the greenskins to go across the shallows in force.

A fellow officer looked nervously to Captain Jacq, “Captain, what do we do?”

The grizzled pirate shrugged, “Today, we pay our duty tot he Emperor. Make ready to sail!”

Today's battle will be a game of Aquanautica Imperialis between the Pirate Syndicate of Da Deff Islands and the Ork Kill Fleets. This represents an Ork force trying to force the Shallows between the Green Zone and the battle zone on Baron's Island. I will be using paper templates again to play this round of the campaign.

Since the battle will take place in the Shallows, the Ork forces will face a high risk of grounding, unless they stick to the deeper channels. Therefore, I am going to give them a 20% points bump to the pirate fleet, who are largely immune to grounding thanks to their shallow draft craft.

Mission:
The Orks are trying to break through the Pirate fleet and make landfall on the other side of the Shallows. They can do this by either landing on the opposite sides shore or moving off the board. If they get more crew points ashore than they lose in damage points after 6 turns the Orks win.

Set-up:
This battle is being played on a 4x4 foot table. The entire board is considered shallow water, except for the dark blue areas. This is regular depth and Ork ships in these zones will not be at risk of grounding. The Shallows is the area between Da Deff Islands, and is not deeper enough for large ocean vessels. However, some navigation channels have been dredged to allow for easier transport of adaconite and other goods.

Move:
Three of the five Grot Kuttas ground trying to move into the channel. The Drilla Killas WAAAGH! forward and avoid grounding. 4 out of 5 Gun Tubz ground in the Shallows and are hulked. The two Boiler Boatz manage to make it to a channel. Meanwhile, the Pirates moved forward to get ready to pound the few Ork boats that made it into the channel.

Battle:
The big guns of the Monitors roar to life, and manage to smash one of the Drilla Killaz into a hulk. The Ork ships do not have the range yet. The lead pirate ravager uses its main gun and takes out a Grot Kutta from a distance. Seeing the range, his fellow Ravagers take out the last Grot Kutta.

End:
The Mob Boatz race to get between a couple of small islands.

The Grot Kutta hulked by the Ravager drift.

The hulked Drilla Killa explodes, but does not cause any further damage.

No wake of damage control to be done.

A tough turn for the Orks comes to an end. 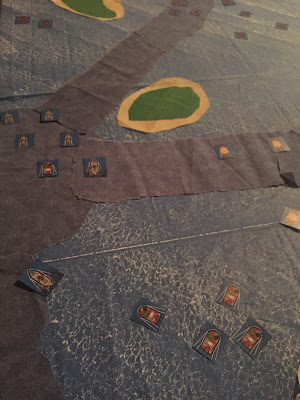 Move:
The Blockade Runners move up in front of the Drilla Killas to launch their mines. However, their Kaptin bellows a mighty waaagh! That carries across the waves and the Ork escorts dash forward. Two bypass the pirate vessels, but one rams one head on. Both boats sink immediately. Of the two remaining Ork craft, one grounds itself in the shallows.

Inspired, an Ork Gun Tub does the same against the last Blockade Runner. There is a mighty crash as steel is bent and breaks. Both boats again sink to the bottom.

The Ravagers move in on the channel to kill off the Boiler Boatz. Seeing them close, the 1 stays in the channel while the other Waaaagh! Ahead towards land, but ends up hitting a sand bar and beaching itself with some damage.

The rest of the Pirate fleet begins to move in on the Ork vessels like Deep Sharks.

Battle:
The Pillager's bow cannons fire on the stuck Boiler Boat that is shrouded in its own steam. Both shots fly wide of their mark. The Boiler boat fires back ineffectually.

The Ravagers fire their long range cannons at the trailing Boiler Boat. One find the mark, but the krew was braced and ready. The Pirates also fire their torpedoes to try to block off the Ork advance.

The Monitors fire on the grounded Ork boat, and miss.

End:
The Mob Boatz are trying to go wide past the Pirates. The Pirate torpedoes raced in front of the Boiler boat and missed.

The Grot KUtta hulks drift and then one sinks.

All wake markers are easily removed. 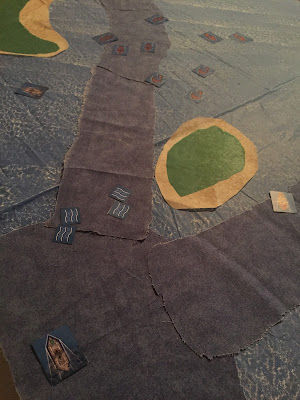 Move:
The 1st Drilla Killa make sit across to land, and beaches itself. The Orks onboard are eager to get off the boat and onto dry land.

A Pillager approaches and sets up to kill the stranded Boiler bOat, but it manages to unstick itself from the sand bar.

The ravagers slow down and close in on the other Boiler Boat, while it tries to follow the channel to safety.

The remaining Pirate swarm in on the remaining Ork craft. They are starting to sense the scrap and loot! 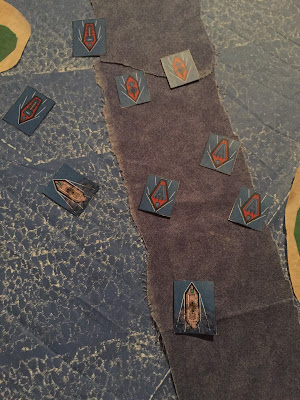 Battle:
The Boiler Boat in the Channel opens fire on the closest Raider, but the one shell is Braced off by the Pirate.

The lead Pillager locks-on to the floundering Boiler boat and fires bow and port weapons. She manages to brace 1 hit, and the armor absorbs a second. However, a third manages to find a weak point in her superstructure and explodes, causing her to be a flaming wreck.

The Pirate Raiders open fire with a barrage of weapon's fire on the last Ork boat and turns it into slag.

Conclusion:
The shallow draft of the Pirate fleet paid HUGE dividends for the Pirates. 8 enemy vessels were destroyed from running aground. That was a deficit that the Ork fleet could not make up, especially when 7 of those groundings came in Movement phase 1.

Upon review, the Orks did not really have a chance in this engagement. They started in the Shallows. Next time, they will need to start in the deeper water. The points bump was not enough, and if there is another battle for the shallows the Orks will need to bring air support and more Mob Boats. However, they did some how manage to get 1 escort across!

The Pirate fleet got really lucky. They are fast and agile, but have limited firepower and no armor. Last game I played as them they were wiped out to a ship before the game ended. The shallows really helped them out, and did most of the work.

Captain Jacq was grinning ear to ear. He had spent his entire career working the Shallows, and this was more scrap in one day than he had seen in his whole life! Sure Ork craft were not the best scrap, but it was scrap! Thanks to the Syndicates contract with the Ammoriss Naval PDF, he had the feeling he was going to be a very rich man when the Operation was over.

Of course, he had to stay alive long enough to collect. That might not be so easy.....

Posted by Blood and Spectacles Publishing at 5:03 AM