I recently got a large order of Osprey Game rules in the mail.  They included titles from the main range of wargames as I am all up-to-date on the Osprey Wargaming Series.  I picked up a wide variety of titles and genres intent on letting my family decide what skirmish game they wanted to try next.  I let them look through the various titles, page through the books, I gave them a quick synopsis of the rules, etc.  At the end of the day, the decision for the next campaign was unanimous.  The winner was…. 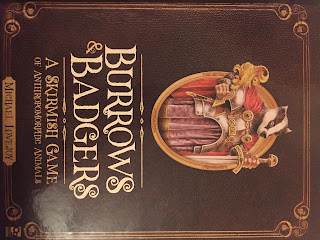 …. I guess the idea of playing Redwall-esque anthropomorphic animals in a fantasy setting was too much for them.   Therefore, I sat down and decided to give the game a good read through and I figured I might as well give the game the old Blood and Spectacles review in the process.  After all, if my family has their way we will be seeing plenty of this game soon.

Now, into Northymbria we go……

Things I Liked
The characters in this game choose an action to complete.  However, the interesting thing to me is that none of these actions are move.  Instead, moving is built into each action as part of the action.  Therefore, a fight action includes moving, a sprint action includes moving more than a fight action.  Etc.  This is pretty clever, because 9 out of 10 times a player just chooses to move as fast so possible around the board so a Move action is almost never used and is a waste of space in the rules.  Very nifty idea.

In addition, the game uses animals of various sizes, with base size to denote the size of the animals.  These different animal sizes are integrated petty well into the rules and make sense.  Therefore players can get a feel for the size of the creature with a glance.  Also, the players get a wide selection of animals from dormouse, to rats, to sparrow, to armadillo, up to badgers!  Your warband can have a wide variety of characters represented.

The magic system is straight forward with various categories and certain warbands can only use some types of magic.  It looks pretty by the numbers, except that each spell has components that amplify the spell.  Component items can be purchased or found in the campaign to help boost your spellcasters’ ability.  This essentially adds a unique resource to manage and a slightly different set of magical effects because of the resources.  This was a clever touch and keeps it feeling appropriate to the setting/genre.

Things I Did Not Like
This game makes use of Hit Points.  As a personal preference I dislike hit points as it makes me track things!  Plus, models do not really degrade as they get worse for wear.  I can see why the decision was made as it helps differentiate the larger creatures from smaller creatures and allows variation in damage from weapons.  However, I do not appreciate the tracking required.

Like many small scale skirmish games, I feel like the game lacks a bit of punch in the tacticalgameplay.  It is all relatively basic 4Ms and target priority in the early going of the campaign or one-off games.  There is nothing that forces much decision making.  This is a common complaint I have been having with skirmish games lately, that the game itself is relatively tactics free with the campaign elements doing all the heavy lifting for the game.  This is not a complaint specific to this game, but one for many games.


Meh and Other Uncertainties
This game hits all the basics in vogue for campaign games at the moment.  It has an injury table, resources, limited base-building and upgrades, experience, and skill building.  These are all excellent to have in a campaign heavy game like this.  However, it again felt pretty much by the numbers as it followed the well-worn Necromunda/Mordheim models.  There is a wide enough selection of skills and modifiers to make each critter unique, but most of the variation will be from which animals you initially put in your warband.

The game has 4 different starting warbands, with a bit of flavor text to give you a feel for how they fit into the setting.  The author did a good job trying to make broad categories that could use a variety of animal types without shoe-horning a player.  They are almost more guidelines as the main differences are a warband special ability and a magic school limitation.  There are also rules for making a warband all of the same critter type.  The simple warband updates should make them feel different enough with minimal extra rules.

Starting scenarios are straight forward.  However, you could easily steal scenarios from any other campaign game such as Frostgrave, Broken Legions, Last Days, Outremer:Faith and Blood, etc. to be playable.  I am very glad it does not simply revolve around gaining treasure.  In addition, there are easy catch-up mechanics for new players in the campaign and additional warbands so ne wplayers and one-off groups can join in easily.

The game does require some of the old polyhedron dice.  Typically I am not a fan of this as it is a barrier to entry.  However, I am starting to see these type of dice at large discount retailers now!  So, this is not as much of an issue.

The book is dotted with artwork that looks a bit like drawn adaptions of medieval woodcuts of animal heroes.  However, I found the artwork hit and miss.  The paintings of the Oathsworn models however were very eye-catching and made me want to pick them up to play right away!


Final Thoughts
Really, the game hangs its hat on the genre theme (or hook) of warbands made up of Redwall-esque anthropomorphic animals fighting in a Fantasy setting.  The game is relatively basic beyond and by the numbers beyond that.  However, it is perfectly serviceable at what it does, and the rules do a good job of reinforcing the theme of the game.  I have no doubt my family and I will have a great time deciding the fate of Northymbria and creating heroes of the land.  Those gamers who have had a lot of experience playing campaign and skirmish games maybe a bit let down as there is nothing particularly innovative.  However, there is plenty of scope to create a rollicking set of adventures.