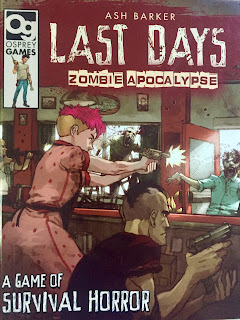 I had previously reviewed Last Days by Ash Barker.  The game is a model vs. model skirmish where two rival survivor bands struggle to survive during the Zombie apocalypse.  The game focuses on warband vs. warband where the zombies function as a complication or friction to achieving the objectives.

Seasons is the first supplement to Last Days.  It expands on the campaign element found in the Last Days booklet.  This allows players to create a year long campaign where the changing weather and conditions impact your games, campaign, and survival.

Pre-COVID, Ash had started a campaign on his Guerilla Miniature Games site.  However, COVID made continuing and completing it unfeasible at the time.

The main reason I picked up this book was two fold:

1. I love a good campaign system
2. I wanted to see how the rules expanded on the "survival" aspect of the genre
3. I also have a survival horror game in the works, so this is grist for the mill
With that being said, you may want to check out what I said about Last Days before you proceed.  I will be trying to focus on what is new and unique to this book below.
So, let's shamble into the review..... 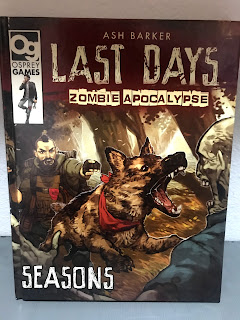 Things I Liked
This book gives a definitive end to the campaign.  You are going to play 12 months, 3 games per season of Spring, Summer, Fall, and Winter.  When that time is over, the campaign can be over..... or you could decide to make the campaign last years.  Either way, there is a clear END state.
The campaign adds managing details like food supply, shelter, sickness, clothing, and other basics for survival.  After all, the world as we know it is over and this puts the focus clearly on the SURVIVAL part of survival horror.  It is more than just surviving the Zombies and other groups.  Each character in the group has additional conditions to track for their survival.  They have four simple states, Not Effected, Suffering, Critical, or Dead.  Critical characters are more of a detriment but can be nursed back to health.
The game adds additional characters to the game.  I always think this is a plus.  It includes adding horses.  This is a good add as they are frequently part of the genre as well.
Different types of leaders can resolve some of the conditions for hunger, thirsty, cold, etc. differently.  This is a nice touch as it makes that initial choice of leader type so much more relevant. Who suffers from the effects is also dictated by the type of model it is (i.e. selfish, Selfless, or Trained).
The game adds some catch-up mechanisms in the form of Group-Leveling.  This can provide extra Experience for skills and abilities.  This allows players who can not participate as frequently in the campaign to stay current with other players.  Plus, groups and players can jump in half way through a campaign as well.
Probably most importantly, these rules add Co-op and Solo play to the game.  This is a genre that seems tailor made for this type of game play.  The main threat of the zombie is by increasing their numbers.  However, they also add different rules to manage the actual character types as well, making the command and control of these models to be more difficult.  Therefore, the friction in the solo/co-op mode is more about managing the personalities of your survivors and less about zombies.  This is a pretty clever way to add "friction" to solo games since the friction in the two-player version WAS the zombies.
Co-op Play has a three special scenarios to play.  With some creativity, I am sure you could also apply some of the core campaign rules to follow a co-op survivor group through a Seasons campaign too.  A GM might be helpful for a full Seasons Co-op campaign. 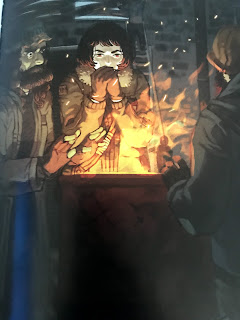 Things I Did Not Like
The game comes with new tracking sheets which is good.  However, I can see how some players will not like the additional Post-game activities that add to the "homework" aspect of running a campaign.  Tracking who is suffering, who is critical, what your leader type is and how it impacts certain things, etc.  All of these additions impact the gameplay by who can and can not participate, or certain mods that could apply; however it does require more work on the players part.  Worse, most of this work is outside of the game itself.
I personally do not have an issue with it, but could see how some players will be less interested in this type of experience.
Secondly, I am disappointed these types of rules and details were NOT in the core book.  I know there are space limitations when you publish but I feel like these are "core" rules that should have been in an Osprey Hardcover book.  It would have made the original Last Days a much more comprehensive and complete product.  As much as I like the additional artwork, it was only another 80 page hard cover supplement book.
I also would have liked if some of the PDF free content such as the Chaos Generator for randomized survivor bands would have found their way into the book as well.  However, I think those came out after this book was being published. 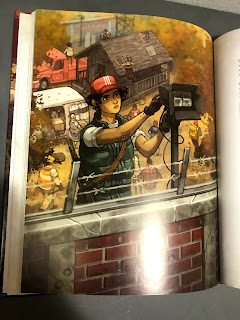 Meh and Other Uncertainties
The rules added 1 new "Season" related scenario in addition to the scenarios in the core rulebook.  More scenarios is never a bad thing!   The Spring campaign involves flooding, the summer a wildfire, the fall has supply carrying zombies, and the winter scenario involves a blizzard.
In addition, the game also adds a Weather table as a complication based on the Season.  That means any of the previous scenarios can be used with seasonally appropriate impacts such as wind, rain, heat, and snow.
There is new seasonal scavenger tables, master skills, equipment, perks and weapons.  Tools like flare pistols, winter weather gear, and water purification tablets all play a role in making sure your survivors can.... ah..... survive?
There are also new post-game roles that can be performed.  This expands the list from the main campaign and makes it a bit tougher deciding what to do.  Do you mount guard, build, or gather firewood?  More decisions equal more fun!
Seasons also adds additional details about Leadership Challenges.  This seemed like a big miss with the initial rules since that is a staple of the genre.  Again, your "leader" type drives how this challenge is resolved and dealt with.  I like that this initial choice continues to drive mechanics in the campaign. 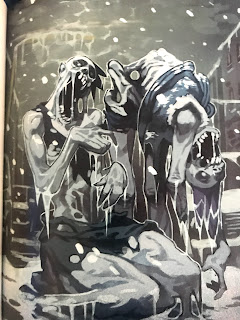 Final Thoughts
Most of the add-ons here are more for flavor but this does a good job of adding depth and interest into the campaign system.  There are a lot more decisions about how you allocate resources and it adds a lot more "survival" to the survival horror theme.
One of the flaws in the original game, I felt was how easy the campaign was on the players.  You could generally get what you wanted to a character.  However, Seasons adds more complexity and decision making.  Therefore, the campaign is much more balanced and less player friendly than it previously was.  To me that was a needed change.
This supplement adds more sauce to your meal.  However, it is mostly campaign related and doe snot really change the normal gameplay.  It is mostly pre and post-game detail.  Some may not appreciate the extra tracking, but I think the added details help add depth, character, and add-on to the Soul of the Game.
The Solo and Co-op Rules are a huge add in these dark days.  The group leveling rules are also needed in an extended campaign game like this.
Overall, if you are playing/planning a campaign of Last Days this is a pretty good book to add!

You can follow Blood and Spectacles Facebook page for more fun: https://m.facebook.com/pg/BloodandSpectacles/posts/?ref=bookmarks&mt_nav=0
Or our website:
http://www.bloodandspectacles.com/
Or our Messageboard:
http://bloodandspectacles.proboards.com/
Or our Wargames Vault Page:
https://www.wargamevault.com/browse.php?keywords=blood+and+spectacles&x=0&y=0&author=&artist=&pfrom=&pto=
Posted by Blood and Spectacles Publishing at 12:40 AM