One of the greatest challenges I have come across in wargame design is trying to recreate historical battles for the tabletop.  Ancient battles sometimes have too few sources and force us to extrapolate.  Modern battles can be too large in scope and require a scale that no tabletop can manage.  Perhaps hardest of all, there is always someone who knows more about the topic than you do!  Therefore, trying to build historical scenarios is a unique challenge.

This topic comes to mind as I recently wrote and article for Wargames, Soldiers, and Strategy magazine about the Battle of Delium.  You can pick up issue 102 at the website here:

In addition, I added several historical scenarios in Men of Bronze.  Those covered various battles from Marathon to Charonea.  While creating these battles there were a couple things to keep in mind.

Sometimes, I feel like a broken record.  Many of my Wargame Design articles start with this simple step.  Arguably it is the most fun and the most challenging part!  Before you can create your historical scenario, you need to understand what actually happened.

Typically, I try to start with some synthesis of the battle or a high level look.  I need to know who was fighting, what were they trying to achieve, and who won.  In addition, these high level resources often have a bibliography, footnotes, or other useful tools to direct you to further reading.  A nice wiki page or similar is often enough to get you started in the right direction.

After getting a high level understanding of what happened, it is time to find the primary sources.  This is eyewitness accounts or contemporary commentary on the subject.  The internet is great, but sometimes a visit to the local library or friendly neighborhood bookseller is in order.  I find there is something satisfying about adding primary sources to my shelf as they often cover more than one battle that I am interested in.  From the Primary sources, you can start to get a feel for important aspects of the battle and the events around it.  You need to know the source material before any additional information will add value.

Now that you have a high level understanding of what happened, you know what the participants at the time thought, you are ready to go beyond.  Here you research what others have said about the battle.  If you are lucky, Karwansaray Publishing has some coverage in one of their other magazines.  These will give you a broader understanding of what current scholars and thinkers are saying about the battle you are referencing.  This often gives you context into the wider warfare of the period and help you fit together why the battle played out as it did.  This is invaluable to try and capture the right feel of the battle. 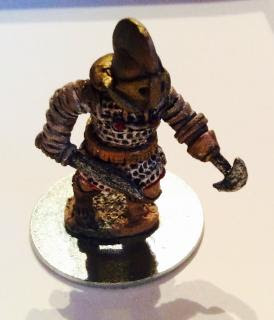 Now you know what you are going to try to model.  That's good.  However, every game system has its own unique mechanics.  These will add possibility and also constraints.  For example, Hail Caesar needs to represent Commanders on the field.  Who were they?  Do they need special traits?  Meanwhile, a game like Pikeman's Lament is not interested in re-creating the big battles of the period and instead is focusing on smaller engagements so you need to scale the scenario appropriately.

The best way to know your system is to read up on it and give it a few games.  Most of us have a preferred system that we know really well.  You probably want your scenario to fit the systems you are most comfortable with.  However, you might not always have that luxury.

Games tables can not typically be as large as the actual battlefields that took place.  I have seen valiant attempts at appropriately scaling Waterloo or Guagamela.  However, ultimately you have to make some abstractions.  A wargamer can only have so many miniatures.

For example, at Marathon several tribes of Athenian were present on the field of battle.  It was estimated to be a Greek force of 10,000 men.  However, we only know about three formations.  The wings and the center of the Phalanx.  However, no table will fit 10,000 miniatures.... and no wargamer wants to paint that many!

This is more art than science.  You need to know how many units your system can handle, and how many actual units they talk about at the battle in the history.  Again, at Marathon the Greeks are divided up into three basic units; The Wings and the Center.  Hail Caesar could reflect this with have three separate commanders each with a detachment under them, while a smaller game like Men of Bronze may only have 2 Hoplite units in each wing, and 1 in the center.  The scale and size of the system provides guidelines for the scale of the scenario.

Another classic example of scaling the conflict is Waterloo.  Few Napoleonic games can match the scale of the actual battle.  Therefore, it is often broken down into smaller conflicts for example the final assault on Hougoumont. 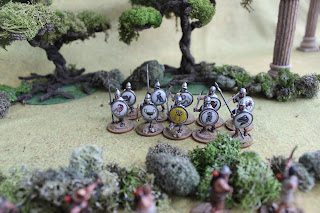 Give It a Hook

Your research should have pointed to some aspect or piece of the battle that makes it interesting and worth re-creating.  Then your scenario needs to reflect that element that made this battle stand out in the history books.  This can be done with force selection, special rules, complication, victory conditions, deployments, board set-up, etc.  Each battle has a unique hook or element to it that must be captured in the scenario to make it worth playing.  Without a hook, your scenario will just be another standard line'em up and take off battle.

As I mentioned, there are several ways to make a good hook.  It is the designers job to decide the best method.  I will list off just a few of the ways this can be done below but it is by no means an exhaustive list.

Special Rules/Complications
Probably the most common approach to make a scenario for a historical battle unique is to include some sort of special rule or complication.  These are rules that fit within the scope of the rule set, but are drawn out particularly for a specific battle.  For example, a Scenario during the Winter War between Finland and the Soviets might include a special rule for bad weather, or moving on skis.  The special rule either adds a new element to game play OR limits the options and gameplay to add decisions and friction.

Special Victory Conditions
These change up the normal method of "winning" the scenario beyond the usual methods.  The best example I can think of would be creating a scenario for Custer's Last Stand at the Little Bighorn.  There is no conventional method that Custer's Cavalry can win.  However, a good scenario design may alter the win conditions to be lasting a certain period of time.  This is outside the normal victory conditions for wargames but are compelling in the historical scenario.

Deployment/Force Lists
Using unique designs of force lists can make a scenario more interesting and provide the hook or twist it needs.  If a game normally only allows X, then an interesting scenario may lift or change those restrictions to better match the actual tactical situation of the battle.  For example, a WWI scenario in late 1918 may allow the British a larger number of tanks than normal, and the Germans more mines and other tricks.

Board Set-up
The terrain or deployment method itself may be enough to add a bit of twist to the scenario.  For example, the raid to recreate the movie Where Eagles Dare would have to represent the mountain top fortress in the movie.  That alone is enough to inspire gamers and create a unique play experience. 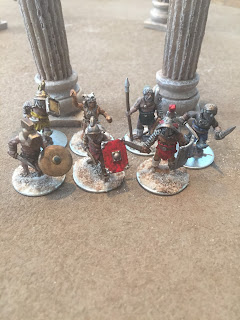 As you can see, Historical Scenarios are a big challenge to design.  Typically, they are only a few pages long but require the most amount of effort and research to try and capture the right feeling or sense of the action on the tabletop.  The research is the key first step, but then you need to translate your findings into the game system you are using with the right mix of scope and scale.  Finally, it needs to have a hook to make the game worth playing.  That is a tough combination to pull off.

Posted by Blood and Spectacles Publishing at 7:29 AM