Battle Report: Wars of the Republic- Romans vs. Gauls

As I mentioned in my blog last week, Osprey has asked me to do some work on a new Wargaming Series book based on the wars of the Roman Republic.  This project actually started by working on two separate projects for myself.  One project was centered on the Roman conquest of Italy and the other was focused on the revolt of Spartacus.  A third project about the wars of the Diadochi also ended up tied into this book as well, since the Romans and the later Successor kingdoms tended to clash as well. 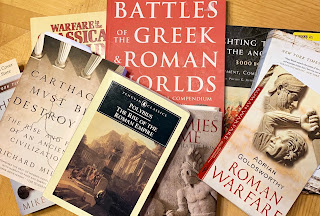 Much of the rules use the Men of Bronze engine as a base.  However, I have taken a great deal of feedback and incorporated it into the rules.  Therefore, they are their own unique beast.  However, I do maintain the basic concepts such as generic troop types, model and base agnostic, and mass battles at more manageable sizes.

This is just an initial play-test that led to some interesting learnings going forward.  I hope you enjoy it as I work diligently on streamlining the rules.

Celtic and tribes of Gaul were a constant problem for the Romans and the more settled people of the Italian peninsula.  Roving warbands, tribes, and clans would often swoop into the area for plunder and also ended up displacing the local populations. .  This challenge was one shared by the Romans, Latin League, Etruscans, and many more.  During the early days of the Republic, the threat of barbarian invasion was real, and it is said the Rome itself was sacked by the warlord Brennus in 387 BCE.

Roman Consuls frequently had to take the legions out to defend the borders of Roman territory from the barbarians moving in.  Some of these missions were successful, but some were not.  However, the battle between Romans and Gauls was a perennial feature of the Roman campaigning season.

Today’s battle will represent an Early Republic “Polybian Legion” or Triplex Acies formation facing off against a migrating tribe from Gaul somewhere to the north of Rome.

*- Due to a faulty memory on my part, I set-up the game with the slingers and did not realize the points mismatch until it was too late.

Mission
This will be a standard set-piece battle.  I opted not to use some of the more exotic scenarios and avoided complications this time around.  I am revamping the scenario and campaign system completely, but those will not play a part in today’s battle.  This is more of a straight up test of battle.

The Romans on their side deployed with the Velites on both flanks, one in the field and the other on the hill respectively.  The Triarri were in the center back, with the Principes in front of them.  The Principes were flnaked by the Hastati.  All were deploed in open order.

Turn 1
The Gauls spend all of their Commander's Gaze to go first.  The Romans only spent two.

The Drilled and Light infantry on the Celtic left move forward to secure the grove.  However, the Romans then steal the initiative and move up.  The Principes and right flank Hastati form Legion.  The other Hastati is in a field and can not form up.  The Roman army advances forward.

The Gauls follow suit with their forces also moving up.  The cavalry moves onto the edge of the board. 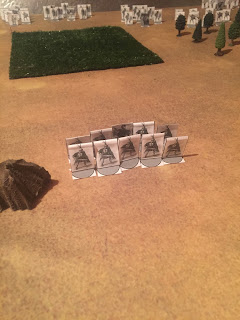 Turn 2:
The Gauls go first again, and the Romans do not interrupt.  The Celts win the bid 2 to 0.

The slingers try to move and shoot the Velites but fail.  The Light infantry takes the grove, while the Elite and Light infantry on the opposite flank move into the field with some skirmishers supporting them.  The Celtic cavalry hovers around in reserve ready to support. 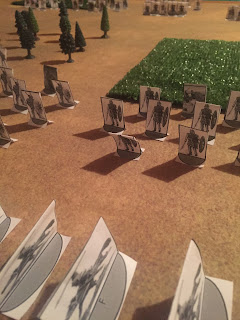 The Romans move forward.  Their light infantry also moves up and throw their Javelins.  The Slingers are too far away still.  However, the Skirmishers at the bottom of the hill and they take some Courage loss from the barrage, and start to Waver!

Gallic slingers pelt the Roman Velites on the flank, and reduce them to 2 Courage and wavering.  The Romans try to interrupt and fail.

Gallic skirmishers fire on the Velites in front of them, but fail to damage as they are wavering.  This time, a Roman interrupt succeeds.  The Velites charge down into the barbarian skirmishers, who do not try to evade. 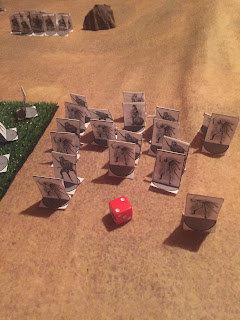 On the other flank, the Roman Hastati clear the field and form Legion.  This time, the Gauls use Commander's Gaze and successfully interrupt.  Gallic light infantry moves to charge the remnants of the Velite and Skirmisher battle, but they do not choose to support the Skirmishers.  Meanwhile, the Warband infantry moves up to support the slingers from the Velites.  The Gallic Light Infantry moves out of the woods and screens the Drilled Infantry moving into position.  The legion will have a tough time cracking those woods. 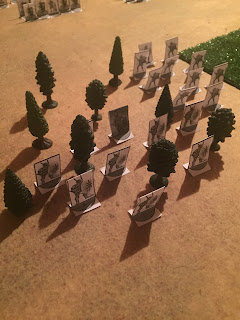 The Romans move up, with the Triarri staying in open order to act as a reserve.  The Velites ont eh right flank are rallied and are no longer Wavering.  The Hastati supporting their flank form legion.

The Melee between the skirmishers and the velites on the Roman left is resolved.  Both sides fight valiantly.  The skirmishers reduce the Velites 1 Courage.  The Skirmishers also lose 1 Courage, but fail their discipline check.  Since they were all ready wavering, they lose their last courage and flee.

The Velites on the Roman right fall back from the slingers.  The Gauls then interrupt and steal the initiative.  Gallic light infantry on the Roman left storm out of the field and hit the Velites in the Flank.  The Velites try to evade, but fail to go far enough.  They are trapped in melee.

The Romans try to interrupt, but fail.  The Gauls maneuver around with the Warband infantry moving in front of the Slingers to shield them.  The Gauls are inviting the Romans to attack them in the difficult terrain, and the Romans need to decide how to respond to the challenge.

The Hastati on the Roman left break formation and try to charge into the Light infantry skirmish as a flank attack.  However, their momentum is broken up by the edge of the field and they fail to make the distance and are wavering!  The Triarri move to support them, but do not have enough Commander's Gaze to form up. 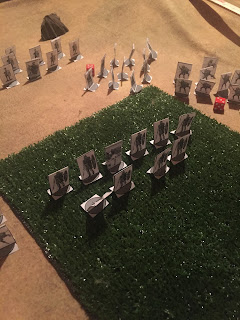 The Hastati on the Right shuffle over to protect the Velites and square off against the Gallic warband.

The Light Infantry Melee is resolved and the Celts steam roll the Velites into a rout.  However, the Gauls also lose 2 Courage and are Wavering.

The Romans gulp, realizing that the Hastati are in a tight place.  The Gallic Elite Infantry containing the Celtic chieftain charges the flank of the hastati and is supported by the Gallic light infantry.  Meanwhile, the Celtic Light infnatry runs screaming from the center of the battle and throws their javelins at the triarri, but they are batted away by the veteran's shields.

On the Right, the Celts fall back from the Hastati and Velites there while the Drilled infantry holds the woods. 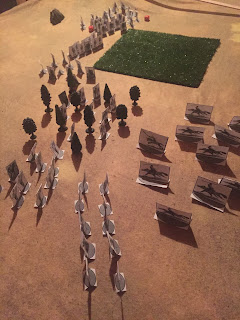 Melees need to be resolved, and the Celts decide to resolve the Light Infantry vs. the triarri and Principes first.  The Celtic Light infantry is swept from the board and the Triarri only take 1 Courage loss.

The Celtic attack slams into the Hastati flank and they are reduced to 1 Courage and are wavering!  They are pushed back 2 Measurement units.

Ferocious Drilled Infantry of the Gauls storms from the woods and attacks the Principes in the rear!  Meanwhile, barbarian cavalry comes thundering down between the woods and fields and also attacks the Roman Principes.  The triarri jump in to support their comrades.

The Gallic Warband moves to block the Romans on the right from supporting their friends in the center.  The slingers also move up to threaten a barrage.  However, the Hastati break formation and charge headlong into the Celtic troops with the light infantry in support.  Things are about to get messy!

The Gallic chieftain and his entourage drive-off the Roman Hastati in a rout. 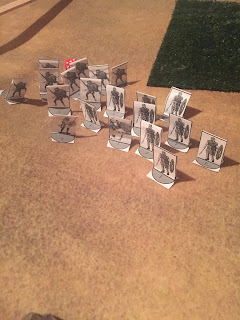 On the Roman right, the Hastati break through and destroy the barbarian warband infantry.  However, the Hastati lose 1 Courage and begin to Waver.

In the End phase, the Roman Hastati and Velite flee the board, as do the Gallic slingers.  However, the Celtic Elite infantry, along with their Light Infantry stay.  They have won the spoils of War this day!

Conclusion
The Gauls manage to defeat the Romans when the Roman army collapsed at the loss of its Consul and main fighting units.  What did we learn from this test?

The Roman Legion formation allows for powerful armor bonus, but it can be beaten by careful planning and maneuver.  For example, difficult terrain breaks up formations.  In addition, the Legion formation is more mobile than a Phalanx, but is limited in the diagonal approaches and can be out-maneuvered there.  Any overwhelming attack can cause them to fail a Discipline test and break formation.  If you keep them out of formation units with lower attack and armor ratings can beat the Romans.

Command and Control was vital in this game.  A lack of command resources hampered the Romans ability to respond effectively in the key Turn 5.  They could not use their Pila special rule and could not provide a key support charge.  In addition, a mis-timed charge in Turn 3 by Hastati left them vulnerable to counter-attack, and the Gauls had the Command points to make sure they could capitalize on the error.

Proper supporting also was a big component of the game.  Without support units, the Elite Infantry would have tar-pitted in the Hastati.  In addition, the Triarri/Principes vs. Drilled Infantry/Cavalry fight would have not been as decisive.  Units going one-on-one would be a grind, but with support a Melee can end quickly.

The new wavering and Discipline check rules make wavering a more common occurrence.  It is harder to recover from a devastating attack that rolled a lot of attack dice.  This means you may want to let a damaged unit get destroyed instead of helping it with more support units.  You have to decide.  For example, in this battle the Light Infantry decided NOT to support their Skirmishers allies since they were all ready in desperate shape.  Joining and supporting them would have led to the loss of the Gallic Light Infantry and Skirmishers in one melee.  I am not sure how I feel about this yet, but it is a decision point for the commander.

The terrain placement rules played a big part in this battle.  The Romans tried to keep terrain out of their way so their formations could stay together.  However, the Gauls used it to their advantage and allowed them to control the center of the battlefield.  In retrospect, the Romans should have placed out of their deployment zone and forced the difficult terrain away from the center of the board.

Overall, a lot was learned as I start to test out the rules and lists I have written so far.  I learned a lot.  I tinkered with the turn sequence, supporting, terrain placement, and C&C.  This let me try it out on the field of battle.  More to come as I keep tinkering with the rules prior to publication.

Posted by Blood and Spectacles Publishing at 3:30 AM